“A New National Prize: Making Clean Energy the Next Oil Sands” by Clare Demerse and Dan Woynillowicz appears in the September October issue of Policy magazine. The article distills the findings of the UN-backed study, Pathways to Deep Decarbonization, in which research teams from 15 countries, including Canada, proposed strategies for national energy reform that will allow us to limit global temperature rise to below 2 degrees.
The report of the U.N.-based Pathways project was presented to the Secretary General in July, to support the UN Climate Summit in September. The press release and details of the Pathways project is at: http://unsdsn.org/news/2014/07/08/ddpp-press-release/.
The Demerse/Woynillowicz article summarizes the overall findings and focuses on the Canadian findings, including that by 2050, wind and solar sources could comprise 27% of Canadian electricity generation, up from 2% today. The article concludes by proposing two simple policy changes to kick off a stronger commitment to clean energy in Canada: more favourable tax treatment for power storage and solar technologies, and consumer incentives for electric vehicles. See “A New National Prize” at: http://policymagazine.ca/pdf/9/PolicyMagazineSeptember-October-14-DemerseWoynillowicz.pdf.

Citing the “wave of hope” generated by the People’s Climate March, on Sept 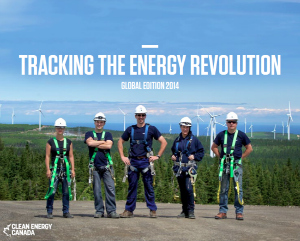 ember 21, Clean Energy Canada released its first-ever annual review, called Tracking the Energy Revolution: Global Edition at: http://cleanenergycanada.org/2014/09/21/tracking-energy-revolution-builds-surging-wave-hope/. With maps, photos and infographics, it is loaded with statistics that reveal the extent of the global shift to renewable energy by governments and businesses.