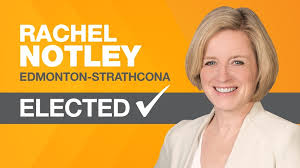 The stunning win by the New Democratic Party in Alberta’s election on May 5 2015  has prompted a flurry of articles, such as What the NDP’s Alberta Win Means for Energy and Climate Change ( May 6) at DeSmog Blog   and Can the NDP get Alberta off the Rollercoaster  at Environmental Defence . Sean Sweeney from the U.S. Trade Unions for Economic Democracy writes about the “Alberta election shock” in the context of other recent elections (India, Greece, Spain, UK), and suggests “ a new ‘class and climate politics’ could be on the rise.”   The new Premier, Rachel Notley, will be held accountable to the NDP election platform, which included the following: “We will establish a green retrofitting loan program that will assist Alberta families, farms and small businesses to reduce their energy usage affordably, which will reduce environmental impacts and create jobs in the construction industry.”     “We will phase out coal-fired electricity generation to reduce smog and greenhouse gas emissions and expand cleaner, greener sources, including wind and solar and more industrial co-generation in the oil sands”.   For reaction by the oil industry, headquartered in Calgary, see   “Boss of Biggest Oil Sands player calls for tougher action on Climate Change” in the Globe and Mail (May 22)   ; and “Big Oil to Rachel Notley, Bring on Carbon tax ” at CBC website (May 23).