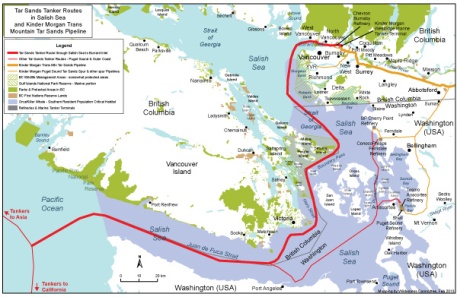 The Liberal government announced a national Ocean Protection Plan  on November 8, investing $1.5  billion over five years,  “to ensure that our coasts are protected in a modern and advanced way that ensures environmental sustainability, safe and responsible commercial use, and collaboration with coastal and Indigenous communities.” Although one of  the goals is “restoring and protecting the marine ecosystems and habitats”, the main thrust appears to emphasize commercial shipping,  maritime traffic, and improved response to tanker oil spills.   A sample of reaction:  An Editorial from the  National Observer “’Ocean protection’ is now code for oilsands pipelines and tanker traffic ” (Nov. 8); “No tanker ban in Trudeau’s $1.5-Billion Coastal Protection Plan”  in The Tyee ; and though Equiterre’s press release strikes a constructive tone, it links the Plan directly to the Kinder Morgan pipeline and subsequent tanker traffic.  As  Chantal Hebert wrote in the Toronto Star,  “it is obvious to everyone following along that he (Prime Minister Trudeau)  was getting some framing in place before green-lighting Kinder Morgan’s TransMountain pipeline expansion”.

The Report from the Ministerial Panel for the Trans Mountain Pipeline Expansion Project  was presented to Natural Resources Minister Carr in early November, the Panel having been appointed by the Minister  in May 2016  to quell  public outrage over the National Energy Board  process. From the Report introduction: “The panel’s mandate was not to test or build social licence for the project. It was to identify what might have been missed in the original review. Appropriate to the panel’s mandate, therefore, this report does not contain specific recommendations. Rather, it provides an overview of input, a reflection of public concern about changing circumstances, and a synthesis of major issues “.   Nevertheless, the panelists managed to say that the Kinder Morgan project “cannot proceed without a serious reassessment of its impacts on climate change commitments, indigenous rights and marine mammal safety. ”   DeSmog blog summarizes the report and commends the Panel .

Protests and legal action against the Kinder Morgan project have been going on for years – see our previous WCR coverage here –  but they are intensifying with the upcoming December 19 deadline for a government decision.  In October, 99 protestors were arrested on Parliament Hill, and  British Columbia’s former Premier Mike Harcourt warned in a November interview   that an approval could result in “a  Clayoquot or North Dakota type of insurrection”. A November 17 event hosted by Leadnow.ca  also makes the link: “From Standing Rock to Burnaby Mountain: Can Direct Action Stop the Kinder Morgan Pipeline?”.   On November 16,  the Canadian Youth Delegation at COP22 in Marrakech delivered a  petition with 210,000 names opposing the Kinder Morgan pipeline; demonstrations and vigils are planned across Canada for November 21, coordinated by 350.org , Leadnow.ca, Greenpeace Canada   , the Council of Canadians    , the Canadian Youth Climate Coalition  and others.  The Kinder Morgan pipeline expansion is being framed as the acid test for the Liberal government’s environmental position.