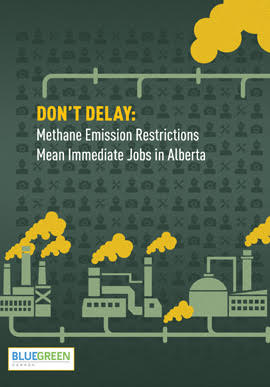 A July 2017  report by Blue Green Canada,   argues that the Alberta government should implement methane regulations immediately, rather than wait for the proposed federal regulations to take effect in 2023.    Speeding up regulations “could reduce air pollution, achieve our climate targets more cost-effectively, and create thousands of high-paying jobs in a single step”, according to Don’t Delay: Methane Emission Restrictions mean Immediate jobs in Alberta .  Blue Green estimates that Alberta’s oil and gas operations release $67.6 million worth of methane annually, and recovering it for energy use could create more than 1,500 new jobs in the province – well paid jobs,  including work in engineering, manufacturing, surveying, and administration.

Environmental organizations, labour groups and technology companies sent a joint Open Letter to Premier Rachel Notley in August, urging her to view the proposed federal methane regulations   as a floor, not a ceiling, and reiterating the argument for economic opportunity: “There are a number of innovative companies in Alberta ready to supply methane capture and detection technologies and services and a large majority of these companies report being poised for strong growth given the right regulatory signals.” The letter, from Blue Green Canada, Canadian Association of Physicians for the Environment, Iron and Earth, Keepers of the Athabasca, Pembina Institute, Peace River Environmental Society, Progress Alberta, Questor Technology, Unifor, and United Steelworkers is here.

Accelerating the target date for regulations is not the only concern.  “Five Ways Alberta Can Raise the Bar on Methane Regulations” at DeSmog Blog, (August 1) makes recommendations for tighter rules for venting and flaring, improved monitoring, and expanded scope. Also in August, the Environmental Law Centre of Alberta released Methane Reduction under the Climate Change Leadership Plan , the latest paper in its Climate Change Legal Roadmap series, which makes recommendations for improvements to both the provincial and federal regulations.  The task of developing methane regulations in Alberta falls to the Alberta Energy Regulator (AER), which has said that it is currently reviewing the feedback from its draft regulations, and will release a document for public comment in Fall 2017.

Earlier, related reports:  In April, Environmental Defence released  Canada’s Methane Gas Problem: Why strong regulations can reduce pollution, protect health and save money , which demonstrated that methane emissions are higher than reported by industry: 60% higher in Alberta. Research funded by the David Suzuki Foundation and released in April, found that methane emissions in B.C. are 250% higher than reported.  The Cost of Managing Methane Emissions,  a June blog from the Pembina Institute, sheds light on the GHG savings to be had by instituting regulations.