Bringing an end to years of controversy, in what NDP Premier Horgan called a “very, very divisive issue”, the British Columbia government announced on December 11 that it will proceed with construction of the Site C hydroelectric dam , on the grounds that it is too late to turn back.  In a press release  which blames “megaproject mismanagement by the previous government”, the government justifies its decision by saying that  cancellation would result in  “ an immediate and unavoidable $4-billion bill – with nothing in return – resulting in rate hikes or reduced funds for schools, hospitals and important infrastructure.”  The press release continues with a list of sweeteners for the opponents of the project, announcing that improved project management to keep costs to $10.7 billion; new community benefits programs to keep jobs in local communities and  increase the number of apprentices and First Nations workers hired; a new BC Food Security Fund to help farmers whose land will be negatively affected; and the promise of a new alternative energy strategy for B.C. .

The National Observer provides a brief overview of reaction in “As costs escalate, Horgan says it’s too late to stop Site C mega-project” . CBC News covers the debate and the decision in several articles, including “ John Horgan disappoints both Site C opponents and supporters in northeast B.C.”   and “B.C. government to go ahead with Site C hydroelectric dam project ” which examines the huge political fallout and  states that the Green Party , which holds the balance of power in B.C.’s legislature,  will not  force an election over the issue, despite their opposition to the decision.

Reaction on labour issues :  For mainstream union reaction to the decision, see “Site C: What Happens Next?”  in The Tyee (Dec. 11)  .  The complex labour politics of Site C is summarized in “ Construction Unions Pressing for Completion of Site C” , which appeared earlier in The Tyee,  (Nov. 24) , and takes a deep dive into the ties between the NDP government and  the Allied Hydro Council of BC, a bargaining agent for unions at previous large hydro projects, and an advocate of the  Site C project.  Following the decision, the  Independent Contractors and Businesses Association (ICBA) stated their “relief” for the go-ahead decision, with the reservation that “Arbitrarily setting apprentice and other workforce ratios will limit contractor flexibility and inevitably drive up costs and slow the construction schedule.”   Similar sentiments appear in the press release from the Christian Labour Association of Canada (CLAC) , which represents the majority of Site C workers  under the Open Shop system in place since 2015. 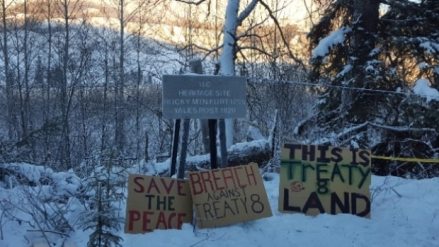 Re the First Nations opposition: “‘A reconciliation fail’: B.C. First Nations promise court action over NDP’s approval of Site C”   at CBC News (Dec. 12), quotes First Nations leaders, including the Union of B.C. Indian Chiefs, and the West Moberly First Nations and Prophet River First Nations, who have already announced that they will apply for a court injunction to halt construction of the project and begin a civil action for Treaty infringement.

A sampling of reaction of environmentalists appears in “Site C a betrayal of First Nations, Ratepayers and Future Generations” (Dec. 11) and in multiple articles at DeSmog Canada https://www.desmog.ca/  . A glimpse of the environmental campaign appears at the Stop Site C website , and the  Wilderness Committee, a member of that campaign, reacts here .