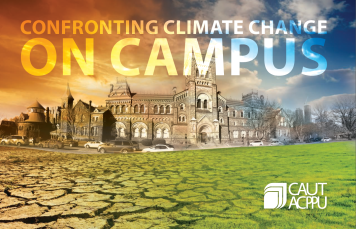 Confronting Climate Change on Campus  is a newly-released guide by the Canadian Association of University Teachers (CAUT/ACPPU), in response to growing awareness and concern amongst the professors and researchers who are members. It presents a three-step plan of practical action to be followed by academic staff associations and researchers across Canada:  To reduce the carbon footprint of campuses by improving building energy conservation and promoting low-carbon transportation;  to expand course offerings dedicated to climate change, and to encourage climate change research through grants and awards; and to advocate for the creation of association or institutional environment committees, or work with established committees, such as collective bargaining or workplace joint health and safety committees, to push climate change concerns.  The French version of the guide is here .

The growing awareness and concern amongst Canadian  academics can be partly credited to the research efforts of the Sustainability and Education Policy Network (SEPN) at the University of Saskatchewan, which CAUT has highlighted, most recently  in  “The Politics of Climate Change” in the CAUT  Bulletin (June 2017).  The article summarizes results of a survey of Canadian colleges and universities by researchers at SEPN, and calls for exactly the kinds of actions addressed in the new CAUT guide.  The scholarly article on which the CAUT Bulletin article is based,”Climate Change and the Canadian Higher Education System: An Institutional Policy Analysis” , appeared in the Canadian Journal of Higher Education in June  2017.  The key findings are: “less than half (44 per cent) have climate change-specific policies in place; those policies focus most often upon the built-campus environment with “underdeveloped secondary responses” to research, curriculum, community outreach and governance policies; and the “overwhelming” response of modifying infrastructure and curbing energy consumption and pollution, while important, risks masking deeper social and cultural dynamics which require addressing.”   A 2-page summary is here ; an infographic is here.

And elsewhere in the world:  According to The Guardian, on February 5, the University of Edinburgh , which divested from coal and tar sands investments in 2015, announced that it will sell its final £6.3m of fossil fuel holdings.  Edinburgh has a  £1bn endowment fund,  (exceeded in the U.K. only by Cambridge and Oxford). Signalling the change to a more climate-friendly investment strategy, Edinburgh has invested £150m in low carbon technology, climate-related research,  and businesses that directly benefit the environment.