Now that the government of Canada has bought the Trans Mountain pipeline project from Texas-based Kinder Morgan,  the governments of Alberta and Canada have launched a public relations campaign to “sell” the deal to Canadians.  The  Keep Canada Working television and  social media campaign  promotes the familiar Liberal government message that  “Developing the economy and protecting the environment are two things that can happen side by side – without choosing one over the other”, and argues that “The Trans Mountain Pipeline expansion funds green investments, shifts the transportation of oil away from more carbon intensive methods like rail or truck, and provides a bridge to a greener tomorrow.”   The full “Climate Action” defense is here .

The “Jobs and the Economy” claims are here, including endorsements by politicians and includes a quote from Stephen Hunt, Director of the United Steelworkers District 3: “Members of the United Steelworkers are proud that the pipeline will be using Canadian-made USW-built pipe.”  The other positive job arguments are sourced from an April 2018 Globe and Mail article by the CEO of the Canadian Association of Petroleum Producers and the corporate website of  Trans Mountain, which are in turn based on an unnamed  Conference Board of Canada report .

What do other economists say about the benefits of the Trans Mountain pipeline?   In February 2018, the Parkland Institute summarized and critiqued the economic arguments in a still-useful  blog “Let’s share the actual facts about the Trans Mountain Pipeline” , and Canadian economist Robyn Allan has written numerous articles critical of the Trans Mountain project for the National Observer, most recently “Premier Notley’s claimed $15 billion annual benefit from Trans Mountain exposed as false by her own budget”  (June 7 2018). Other more detailed publications since the May 2018 purchase by the government:  “Canada’s Folly: Government Purchase of Trans Mountain Pipeline Risks an Increase in National Budget Deficit by 36%, Ensures a 637% Gain by Kinder Morgan”, published by the Institute for Energy Economics and Financial Analysis, describes the fiscal and financial risks and calls for more public disclosure of those details before the Purchase Agreement is finalized in August.  Similarly,  The view from Taxpayer Mountain  (June 2018) from the West Coast Environmental Law Association links to  the actual Purchase Agreement and reviews Canada’s obligations and risks.  On June 26, Greenpeace USA has published  Tar Sands Tanker Superhighway Threatens Pacific Coast Waters  highlighting the dangers of a potential oil spill on the environment,  and on coastal economies.  At risk: the $60 billion coastal economy of Washington, Oregon and California, which  currently supports over 150,000 jobs in commercial fishing and over 525,000 jobs in coastal tourism, and in the British Columbia Lower Mainland, Greenpeace estimates there are  320,000 workers in industries that rely on a clean coastline.

On the issue of climate change impacts, a widely-cited discussion paper, Confronting Carbon lock-in: Canada’s oil sands (June 2018) from the Stockholm Environment Institute,  concludes that  “The continued expansion of Canada’s oil sands is likely to contribute to carbon lock-in and a long-term oversupply of oil, slowing the world’s transition to a low-carbon future.”  And still valuable reading: David Hughes’ Can Canada Expand Oil and Gas Production, Build Pipelines and Keep Its Climate Change Commitments? (June 2016) from the Corporate Mapping Project  , and from Jeff Rubin,  Evaluating the Need for
Pipelines: A False Narrative for the Canadian Economy  (September 2017). 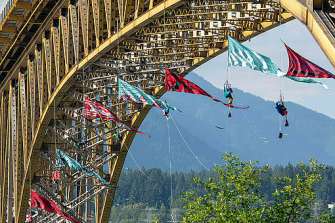 Demonstrations continue:   Vancouver housing activist Jean Swanson’s  argues that the billions spent on Kinder Morgan would be better used for social housing, job creation, and renewable energy in  “Why I got arrested protesting the Kinder Morgan pipeline” in The Tyee, July 11.  Twelve Greenpeace activists mounted an “aerial blockade”  for Trans Mountain oil tankers by hanging from a bridge above the water on July 3 and 4.   And on July 11, CBC reported  “Secwepemc First Nation’s ‘Tiny House Warriors’ occupy provincial park in Trans Mountain protest” .  The Tiny House Warrior movement began in 2017, near Kamloops, to block the pipeline by  re-establishing village sites and asserting authority over Secwepemc First Nations unceded Territories.