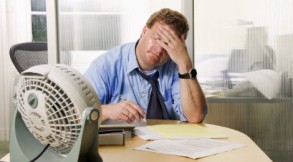 On July 26, the U.K.’s Environmental Audit Committee published Heatwaves: adapting to climate change,  which examines the developing trend of heatwaves, the responsibility for heatwave protection, how to protect human health and well-being, and effects on  productivity and the economy.  The final statement on conclusions/recommendations states:  “Heatwaves can result in overheating workplaces and lower employee productivity. In 2010, approximately five million staff days were lost due to overheating above 26°C resulting in economic losses of £770 million. Given that extreme temperature events in Europe are now 10 times more likely than they were in the early 2000s, similar losses will occur more frequently. However, some businesses, particularly smaller businesses, do not have business continuity plans in place. The Government should make businesses aware of the developing threat of heatwaves and the economic consequences. Public Health England should also issue formal guidance to employers to relax dress codes and allow flexible working when heatwave alerts are issued. The Government should consult on introducing maximum workplace temperatures, especially for work that involves significant physical effort. Procurement rules should be updated so that schools and the NHS do not spend public money on infrastructure which is not resilient to heatwaves. The Department for Education should issue guidance for head teachers about safe temperatures in schools and relaxing the school uniform policy as appropriate during hot weather. ” At present, there is no set temperature limit for indoor work, (only that buildings be kept at a “reasonable” temperature)  and the government’s 2018 Heatwave Plan makes no mention of employer responsibilities or the dangers of heat stress for workers.

Some of the Committee recommendations echo those contained in the  Trades Union Congress publication, Cool it! Reps guide on dealing with high temperatures in the workplace .  It documents examples of heat stress in workplaces, and provides checklists for union representatives in both indoor and outdoor workplaces. The Cool it! guide  recommends that a maximum indoor  temperature be set at  30°C (27°C for those doing strenuous work), and  “ a new legal duty on employers to protect outside workers by providing sun protection, water, and to organise work so that employees are not outside during the hottest part of the day.”  The guide also takes note of the  special circumstances of drivers.

Current heat-related guides and information from the government’s Health and Safety Executive are here.