Delegates gathered in Manchester U.K. for the 2018 Congress  of the Trades Union Congress (TUC), Britain’s central labour body, in early September, marking its 150th anniversary by returning to the city in which it was founded.  Speeches and debates covered a broad range of issues, notably Brexit , and diversity and equality among union members . 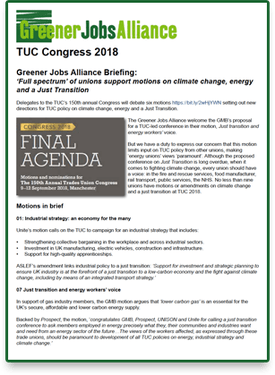 The Greener Jobs Alliance Congress Briefing  lists and summarizes the six motions which relate to climate change, energy, and Just Transition, including one which has proven controversial.  Motion 07,   Just transition and energy workers’ voice  was presented by GMB  (which includes workers at the Hinkley Point nuclear facility amongst its members); the motion was adopted with minor amendments.  It states that “Congress notes that ‘just transition’ is a much-used but often ambiguous term and there is no shortage of voices who believe they are qualified to say what energy workers and communities want and need”,  the motion continues with …   “Congress believes that the views of the workers affected, as expressed through these trade unions, should be paramount and central to development of all TUC policies on energy, industrial strategy and climate change, and that the TUC should develop a political and lobbying strategy led by the voices and experiences of energy unions and their members.”  “These unions” referred to in the motion are GMB,  Prospect, UNISON and Unite.

But the Greener Jobs Alliance Briefing calls for a “full spectrum” of unions in the Just Transition debates, stating: “we have a duty to express our concern that this motion limits input on TUC policy from other unions, making ‘energy unions’ views ‘paramount’. Although the proposed conference on Just Transition is long overdue, when it comes to fighting climate change, every union should have a voice: in the fire and rescue services, food manufacturer, rail transport, public services, the NHS. No less than nine unions have motions or amendments on climate change and a just transition at TUC 2018.”  The Campaign against Climate Change Trade Union group expressed similar “deep concern” in its blog, saying that the motion “carries the risk of moving backwards from last year’s progress on climate policy (2017 climate motion).”  Finally,  the Public and Commercial Services Union (PCS) labelled the motion as “divisive”, according to a  UK DeSmog blog  (Sept. 27) .  That same blog notes that the U.K. Labour Party has picked up on the TUC’s motion in its Environmental Policy statement,  Green Transformation , which states that the Labour Party will “work closely with energy unions to support energy workers and communities” through the transition to a low-carbon economy.