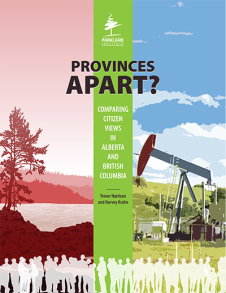 In Provinces Apart? Comparing Citizen Views in Alberta and British Columbia,  released by the Parkland Institute on October 25, the authors re-visit the data from a survey conducted in February – March 2017, and conclude that what differences exist between citizens of Alberta and British Columbia are attributable more to their political self-identification than to their province, age, or educational status. While the Trans Mountain Pipeline expansion was certainly an active issue at the time, the survey pre-dated the bitter political battle and subsequent media attention which ensued from the federal government’s purchase of the project, and the Court decision which suspended construction. After a brief review the political events of the most recent Trans Mountain controversy, the authors conclude “the governing and opposition parties in both provinces have exacerbated this partisan divide.”

In those calmer days when the survey was conducted, citizens’ views on political influence, the fossil fuel industry, climate change, and the role of protests in a democracy were not as divergent as stereotypes tell us.   Findings of particular interest: 53% of respondents in Alberta and  69% in B.C. agreed that “we need to move away from using fossil fuels;” 76% in Alberta and 68% in B.C. thought the petroleum industry has too much influence over governments, (fewer than one-third said the same about either environmentalists, labour unions or Indigenous groups). 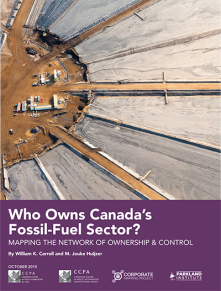 The Parkland Institute also published Who Owns Canada’s Fossil-Fuel Sector? Mapping the Network of Ownership & Control   in October, as part of the Corporate Mapping Project, in partnership with the Canadian Centre for Policy Alternatives B.C. and Saskatchewan, and the University of Victoria.  The analysis covers the period from 2010 to 2015, and demonstrates that the production, ownership and control of the fossil fuel industry is highly concentrated: “The top 25 owners together account for more than 40 per cent of overall revenues during this period.”  At 16%, foreign corporations are the largest type of majority owners (led by ExxonMobil) ; asset managers and investment funds are the 2nd largest; banks and life insurers are the third-largest type of owner (approximately 12% of revenues), with the big five Canadian banks (RBC, TD, Scotiabank, BMO and CIBC) among the top investors. The federal Canadian government, combined with provincial governments, own 2%.  The report provides a wealth of information, including names and ranks of specific companies in the network of ownership and control, points out the importance of divestment campaigns, and “identifies the need to shift from fossil-fuel oligarchy to energy democracy, in which control of economic decisions shifts to people and communities, such as through public ownership of renewables and much greater democratic participation in energy policy.”

For more insight into Alberta and its energy economy, the Parkland Institute is hosting a conference, Alberta 2019: Forces of Change   from November 16 – 18. Presentations include: Opening Keynote, “In the Eye of the Storm”, by Lynne Fernandez (Errol Black Chair in Labour Issues, Canadian Centre for Policy Alternatives- Manitoba); “The Alberta Economy in Context” by Angella MacEwen; “Just Transitions in the Belly of the Beast” by Emily Eaton ( University of Regina); and “Boom, Bust, and Consolidation: Corporate Restructuring in the Alberta Oil Sands” by Ian Hussey (Research Manager at Parkland Institute). 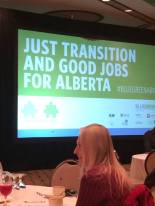 Also from Alberta:  the 2018 event from BlueGreen Canada,  Just Transition and Good Jobs for Alberta 2018 was held in Edmonton on October 22 and 23, with active participation and sponsorship of USW, Unifor, and the Alberta Federation of Labour.  This is the third annual event –  summaries from 2017  and 2016  are here.