On October 30,  the first Bill introduced to the new session of the Saskatchewan legislature was Bill No. 132—The Management and Reduction of Greenhouse Gases Amendment Act, 2018 , which, according to a Regina Leader-Post article , carries on  Bill 95, which was introduced in 2009 by the previous government of Brad Wall .  The government’s press release   states that the new legislation: “provides the regulatory framework for performance standards to reduce industrial greenhouse gas emissions, a provincial technology fund, performance credits and offset credits…. In addition to performance standards and compliance options, these amendments require large emitters to register with the province, provide for administrative efficiencies in governance of the technology fund, and enable associated regulations and standards. ”   The press release carries on the province’s existing climate change strategy from December 2017,  titled Prairie Resilience, which rejects carbon pricing. 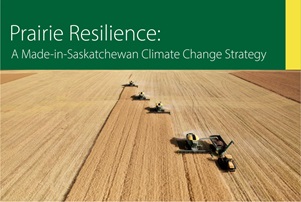 “Saskatchewan introduces climate change legislation as feud with Ottawa continues”   in the National Observer  provides a summary; the “feud” referred to was most recently in the news on October 29,  “Doug Ford attacks ‘terrible tax’ on carbon alongside Saskatchewan Premier Scott Moe” .

As yet, the text of the Bill is available only through a two-step process: Bills are listed here , which lists a PDF file “ Progress of Bills 2018 – 2019”  which includes a live link to Bill 132.