The U.S. Global Change Research Program, a consortium of 13 federal government departments and agencies,  released volume 2 of the 4th National Climate Assessment  of Climate-change Impacts on the United States on November 23. This report is exceptional for the  unequivocal, comprehensive, and detailed information contained, and a new emphasis on the economic impacts of climate change, described as “broader and more systematic”, providing an advancement in the understanding of the financial costs and benefits of climate change impacts.  For example, the report estimates a worst-case scenario for 2090 where extreme heat results in “labor-related losses”  of  an estimated $155 billion annually;  also,  $141 billion from heat-related deaths, $118 billion from sea level rise and $32 billion from infrastructure damage by the end of the century. Other key themes: the negative impacts of climate change on trade, the disruption of supply chains for U.S. manufacturers,  likely loss of productivity for U.S. agriculture, unequal impacts of climate change on vulnerable populations, and the impact on Indigenous peoples.

In an article from the New York Times, climate expert Michael Oppenheimer  says, “This report will weaken the Trump administration’s legal case for undoing climate change regulations and it strengthens the hands of those who go to court to fight them.”   Small wonder the administration chose to release it on the eve of American Thanksgiving, when public attention would be distracted.

Volume 2, just released, is based on the scientific findings of the  4th National Climate Assessment, Volume 1,  which was released in 2017.  Volume 2 is over 1500 pages, and is composed of 16 national-level topic chapters, 10 regional chapters, and 2 response chapters. Each of the 29 individual chapters is downloadable from this link.  The Overview is here.   A Guide  briefly explains the modelling assumptions and sources of information used; more specific detail is in Appendix 3: Data tools and  scenario products   .

Media reaction and summaries include: “Climate Change Puts U.S. Economy and Lives at Risk, and Costs Are Rising, Federal Agencies Warn” in Inside Climate News  (Nov. 23);  “New National Climate Assessment Shows Climate Change is a Threat to our Economy, Infrastructure and Health” from the Union of Concerned Scientists (Nov. 23);  “U.S. economy faces hit, climate change report warns”  from the New York Times, reposted to Portside (Nov. 24) ; or “3 big takeaways from the major new US climate report”  in Vox (Nov. 24) . 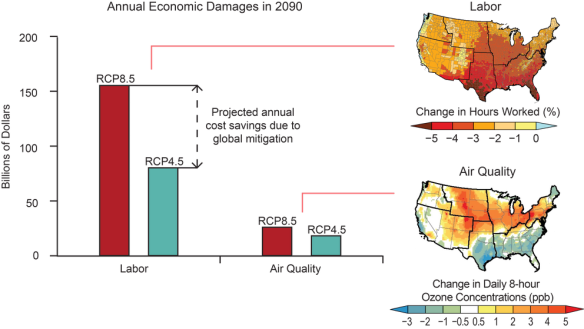