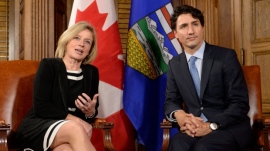 An analysis of the evolution of Justin Trudeau’s  climate change policies is  summarized in “The Rise and Fall of Trudeau’s ‘Grand Bargain’ on Climate”,  published in The Tyee (Nov. 14). The article is a summary by author Donald Gutstein of his new book,  The Big Stall: How Big Oil and Think Tanks Are Blocking Action on Climate Change in Canada , which the publisher describes this way: “The Big Stall traces the origins of the government’s climate change plan back to the energy sector itself — in particular Big Oil. It shows how, in the last fifteen years, Big Oil has infiltrated provincial and federal governments, academia, media and the non-profit sector to sway government and public opinion on the realities of climate change and what needs to be done about it.” (Interesting companion reading to this argument: an October report from the Parkland Institute and the Corporate Mapping Project, Who Owns Canada’s Fossil-Fuel Sector? Mapping the Network of Ownership & Control.)  The Big Stall  concludes that by framing the challenge as an opportunity for economic growth through clean technology, the government has failed to address climate change effectively.

Recent studies continue to support the assessment that the world, including Canada,  has not done enough to meet its climate change goals, let alone the urgent need to decarbonize. The United Nations Environment Programme (UNEP) will release its annual Emissions Gap Report 2018  in November, but in a pre-release chapter released at the Global Climate Action Summit in September, the UNEP asserted that national governments are not meeting their Paris Agreement targets, and that non-state actors and sub-national governments are crucially important in closing the gap.

Time to Get on with It: The LCEI 2018: Tracking the Progress G20 Countries Have Made to Decarbonize Their Economies  was released in early October by PricewaterhouseCoopers (PwC) consultants.  Their Low Carbon Economy Index (LCEI) report states that in 2017, no country was on track with the decarbonization rate needed to achieve the Paris Agreement temperature goal, and ranks Canada as 14th out of 20. 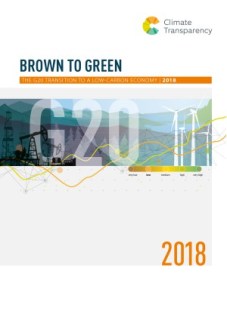 The Brown to Green Report 2018  released by Climate Transparency in November rates all the G20 nations on 80 indicators regarding decarbonisation, climate policies, finance and vulnerability to the impacts of climate change.  No G20 countries are on track to meet their targets ( Saudi Arabia, Turkey and Russia are ranked as worst ).The 15-page Canada Country Report  finds that Canada’s GHG emissions per capita are the highest of any G20 country at  22 (compared to a G20 country average of 8 ). Despite encouraging coal phase-out policies, “Canada’s NDC is not consistent with the Paris Agreement’s temperature limit but would lead to a warming between 3°C and 4°C. ”

Finally, for an academic treatment of this issue: “Warming assessment of the bottom-up Paris Agreement emissions pledges”  appeared in Nature Communications on November 16. It states that India is the only country close to being on track to meet a 2 degree target, and singles out Saudi Arabia, Russia, Canada and China as laggards.

2 thoughts on “Canada’s record on climate change, and the global failure to meet Paris emissions targets”