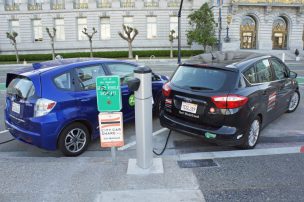 The Good News: British Columbia:   In the latest encouragement to electric vehicle ownership in British Columbia, the Premier announced on November 20  that he will introduce legislation in Spring 2019 to phase in targets for the sale of zero-emission vehicles in the province –  10% ZEV sales by 2025, 30% by 2030, and 100% by 2040.  This will be accompanied by funding to expand charging infrastructure, and for consumer incentives in addition to the existing incentives under the Clean Energy Vehicle program . The new policies are  in line with the Intentions Paper on Transportation,  part of a public consultation in Summer 2018.  (For background, read  “Fuelled by strong demand, B.C. adds $10 million to electric vehicle incentive program” (Sept 27) and “B.C. proposes mandate for electric vehicles”  (July 27), both in the National Observer.) Mandates for EV sales are already in place in Quebec, California, and other U.S. states. 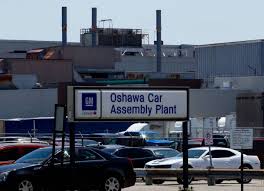 The Bad news: Ontario:  Mandates for EV sales in the U.S. was part of the modernization strategy  by General Motors in its comments  to the U.S. government under the  Safer Affordable Fuel-Efficient (SAFE) Vehicles Rule on October 26, 2018.  According to the  National Observer  at the time, “Transport Canada welcomes GM’s electric car plan”. Apparently, Transport Canada didn’t know what was in store.  As of November 26, GM’s  global modernization strategy came crashing down on Ontario auto workers – announced in the November 26 corporate press release:  GM Accelerates Transformation . The brief and unexpected press release names the GM Assembly plant in Oshawa Ontario as one which will be “unallocated” in 2019, along with  Detroit-Hamtramck Assembly ( Detroit) and Lordstown Assembly (Warren, Ohio). The Toronto Star makes the connections in “GM plant closure in Oshawa part of company’s shift to electric, self-driving autos”   (Nov. 26) .

Unifor, which represents approximately 2,500 GM Oshawa workers who will lose their jobs, was only informed of the decision one day ahead of the public announcement, and has stated  : “Based on commitments made during 2016 contract negotiations, Unifor does not accept this announcement and is immediately calling on GM to live up to the spirit of that agreement.”  Ontario’s Premier Ford issued a statement  saying: “As a first step, I will be authorizing Employment Ontario to deploy its Rapid Re-Employment and Training Services program to provide impacted local workers with targeted local training and jobs services to help them regain employment as quickly as possible….we are asking the federal government to immediately extend Employment Insurance (EI) eligibility to ensure impacted workers in the auto sector can fully access EI benefits when they need them most….We are also asking the federal government to work with their U.S. counterparts to remove all tariffs so that impacted auto parts suppliers can remain competitive after the Oshawa Assembly Plant closes its doors.”