“Climate Jobs for All”   by Jeremy Brecher appeared in CounterPunch on December 3, and it would be hard to find a more knowledgeable guide to the current U.S. policy discussion about a  Green New Deal.  Brecher traces the origins and evolution of one of the key aspects of the Green New Deal – the Jobs for All Guarantee (JG), which began in 2017 as a policy proposal to combat unemployment and inequality.  He then discusses how the concept expanded to include a Climate Jobs for All Guarantee – a jobs guarantee program that is geared to the transition to a climate-safe, fossil-free economy.

The Green New Deal is an increasingly popular and powerful policy within the Democratic Party of the U.S.  Here are some of the stepping stones along the way to the present:

In May, 2017, Toward a Marshall Plan for America: Rebuilding Our Towns, Cities, and the Middle Class  was published by the Center for American Progress as a proposal for full employment policies, based on the precedent of the Roosevelt New Deal policies of the Great Depression.

The Federal Job Guarantee – A Policy to Achieve Permanent Full Employment was published in March 2018 by the Center on Budget and Policy Priorities; also in March,  “Why Democrats Should Embrace a Federal Jobs Guarantee” appeared in The Nation .

“The Job Guarantee: Design, Jobs, and Implementation” , published in April 2018, was one of several working papers on the topic  by Pavlina R. Tcherneva   of Levy Economics Institute of Bard College, New York.

Application to the climate change movement began with  “It’s Time for the Climate Movement to Embrace a Federal Jobs Guarantee”, which appeared in In These Times in May 2018, written by two members of the Sunrise Movement, the U.S. youth organization which promotes climate justice, and which has published the Climate Jobs Guarantee Primer  .

A Green New Deal: A Progressive Vision for Environmental Sustainability and Economic Stability   was published by Data for Progress  in September 2018, stating:  “This report articulates a vision for a broad set policy goals and investments that aim to achieve environmental sustainability and economic stability in ways that are just and equitable.” 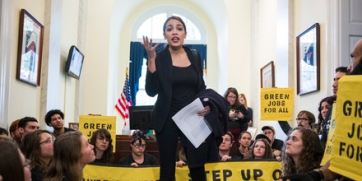 The  topic began to hit the headlines with the sit-in at Nancy Pelosi’s office on November 13, organized by youth activists for climate justice in the  Sunrise Movement  and Justice Democrats .  Representative-elect Alexandria Ocasio-Cortez  unexpectedly took part in the demonstration, demanding that Pelosi  support a Select Committee on the Green New Deal  – which had been part of AOC’s platform in the congressional election .  David Roberts of Vox provides expert political analysis in  “Alexandria Ocasio-Cortez is already pressuring Nancy Pelosi on climate change” (Nov. 15) , and The Intercept also reported on the demonstration in “Alexandria Ocasio-Cortez Joins Environmental Activists in Protest at Democratic Leader Nancy Pelosi’s Office ” .

For the latest, as Democratic members of Congress begin to sign on, read  “The Game-Changing Promise of a Green New Deal”  by Naomi Klein in The Intercept (Nov. 27);  “Video: Naomi Klein interviews Bernie Sanders on Climate Change”  on December 3, before the National Town Hall on Solutions for Climate Change, and “The Green New Deal is designed to win” in The Atlantic   (Dec. 5)  .

If time is short, read the brief introduction by the  Sierra Club magazine : “What is this Green New Deal anyway?” , and follow  #Green New Deal .