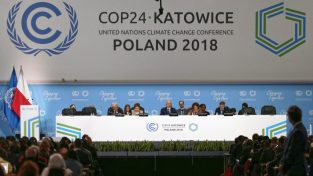 In the wee hours of Saturday December 16, after a dramatic extension of negotiations, the Katowice Climate Change Conference of the Parties (COP24) concluded with the adoption of  the Katowice Climate Package.   The meetings had brought together over 22,000 participants, including nearly 14,000 government officials, over 7,000 representatives from UN bodies and agencies, intergovernmental organizations, and civil society organizations, and 1,500 members of the media.  What was accomplished?    IISD Reporting Services provides an overview summary of accomplishments,  and a 34-page compilation of official decisions . For a more readable general overview, the UNFCC summarizes and links to the highlights in a release on December 14 , including reports and developments of civil society participants. Next steps for the international negotiators: Another round at  COP 25 in Chile in November 2019.  In preparation, UN Secretary-General Antonio Guterres will convene a Climate Summit in New York City in September 2019 .

Canadian reaction to COP24:  As characterized by Elizabeth May, leader of Canada’s Green Party – there was a dual agenda at the COP24  meetings: first,  to agree on  the “Paris Rule Book”,  which will govern a shared approach to calculating and reporting on the specific items required under the  Paris Agreement, and secondly, to respond to the urgency and dire warnings of the October IPCC report to hold global warming to 1.5 degrees C.  Recognizing the difficulty of achieving any level of agreement in the politically fraught atmosphere of 2018, reaction in Canada and internationally was generally positive and aimed to put the best light possible on the failure to resolve other points, such as more ambitious GHG reduction targets.

From Canadian sources: “COP24 delivers progress, but nations fail to heed warnings of scientists”  (Dec. 15) from the Climate Action Network Canada; “The Hard Work Starts Now as COP Delivers Incomplete Rule Book, Low Ambition”   from the Energy Mix (Dec. 18); “Environmental activists frustrated COP24 deal not strong enough” at CBC ; and from Greenpeace Canada  “COP24 ends without firm promises to raise climate action and ambition.”   More critical comments come in “Trudeau government fails to take bold action at COP24 to avoid climate breakdown” (Dec. 16)  and  “McKenna’s global carbon market plan more charade than genuine climate action”   both  by Brent Patterson in Rabble.ca.  On December 14, CBC broadcast an interview with Elizabeth May , where she asks  “Do we want to survive or not?” , criticizing the focus on bureaucratic process which interfered with addressing the fundamental question of how to reduce emissions.

What did Canada achieve at COP24?:  Canada’s  Minister of Environment and Climate Change pledged to improve Canada’s emission reduction targets on December 5 before she travelled to Katowice, and once there, signed on to the statement of the “High Ambition Coalition” , (along with    the Marshall Islands, Fiji, Ethiopia, EU, Norway, U.K., Germany,  New Zealand and Mexico), pledging to enhance their Nationally Determined Contributions under the Paris Agreement by 2020.

Regarding coal phase-out, the government’s official  statement  was issued on December 13,  highlighting  Canada’s continuing leadership role in the Powering Past Coal Alliance, which was co-founded by Canada and the U.K. in 2017.   On  December 12, Canada made good on its 2016 pledge to phase out traditional coal-fired electricity by 2030 by publishing the final regulations for that effort in the Canada Gazette .

Regarding Just Transition:  Previous WCR posts (Dec. 6  and Dec. 11  ) summarized the many Just Transition publications and events at COP24.  Canada, along with 40 other jurisdictions, was a signatory to the  Solidarity and Just Transition  Silesia Declaration  put forth by host country Poland.  In the Climate Action Network Canada  press release at the conclusion of COP24, Donald Lafleur, Executive Vice-President, Canadian Labour Congress is quoted by Climate Action Network as saying:   “Canada’s trade unions applaud Canada and other parties for signing on to the Solidarity and Just Transition Silesia Declaration. We hope to see a commitment to a just transition that is tied to human rights and helps drive a more ambitious climate action plan designed to keep global warming below 1.5 degrees.”  The Environment and Climate Change Minister joined the Canadian Labour Congress and the Just Transition Centre at the side event,  Unions in Action on Just Transition,  on December 10, yet she did not release the recommendations of the federal Task Force on Just Transition for Canadian Coal Power Workers and Communities .  Personal testimony of Just Transition came  from Roy Milne, a coal miner and the president of United Steelworkers Local 1595 in Wabamun, Alberta, who calls himself part of the first group at the first coal mine to be  phased out in Canada. “Some jobs in new energy industries come with a pay cut of $50K: coal miner” is an interview with Mr. Milne, was broadcast on CBC’s The Current on Dec. 13, in which he states that currently, “a basic operator earns $80,000-$100,000 per year, with additional benefits and a defined pension scheme. An electrician retraining as a renewable energy technician would go from that salary to $45,000-$50,000 per year.”

Other issues: The Minister’s  own Statement at the conclusion of COP24 says that “Canada also played a leading role in laying the groundwork for a global carbon market, to help mobilize the billions of dollars of investments needed to tackle climate change” and “ Canada took part in the Carbon Pricing Leadership Coalition, encouraging all countries around the world to use the most cost-effective tool to reduce emissions.”  The details of that global carbon market remain unspecified.  In another press release,  the government announced that it will support increased participation by Indigenous people in international climate talks, by  providing  $800,000 over four years to to enable the creation of the Indigenous Peoples Focal Point at the United Nations Framework Convention on Climate Change. “The Focal Point will coordinate and lead work on issues related to Indigenous Peoples and climate change, promote awareness of Indigenous perspectives on climate change, and serve as a technical expert and advisor.”

And yet, with all the pledges and announcements, it must be noted that right after COP24, on December 18, the government of Canada announced    a $1.6 billion aid package for Alberta’s oil companies.  The National Observer article summarizes this in “Sohi announces $1.6 billion to help Alberta oil patch”  and quotes Minister Sohi: “ These are commercial loans, made available on commercial terms. We have committed to phasing out inefficient fossil fuel subsidies by 2025, and we stand by that commitment.” However, as stated in a press release from Environmental Defence    “At COP24 in Katowice, Minister of Environment and Climate Change Catherine McKenna announced that Canada would increase the ambition of its targets to cut carbon pollution. Less than two weeks later, her Cabinet colleagues, Minister of Natural Resources Amarjeet Sohi and Minister of International Trade Diversification Jim Carr, are using public money to make Canada’s already-weak targets even harder to achieve.”