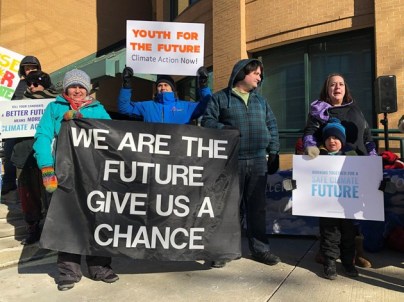 Children in Canada and around the world  continue to demand climate action from their nations’ policy leaders, following the example of the  now-famous Greta Thunberg.  In the first week of January 2019, according  Greta’s Twitter feed, climate strikes were held in “South Africa, USA, Canada, New Zealand, Czech Rep, Uganda, Nigeria, Faroe Islands, Italy and many more”.    As you would expect, social media plays a huge part in the campaigns, centred on the #Fridays for Future Facebook page  and @fridaysforfuture Twitter account.

In Canada, Twitter accounts to watch are from  @Sophia Mathur , (the 11-year old  Sudbury girl who was the first to join the international campaign – profiled here ); @Student Climate Activist , and Manitoba Energy Justice Coalition , both from Winnipeg, Manitoba; Toronto Climate Future from Toronto and the GTHA , also with a Facebook page here .  The Citizens Climate Lobby is hosting an interactive map  to track climate strikes around the world, and The Climate Pledge Collective offers free resources to  help others organize FridaysforFuture events. 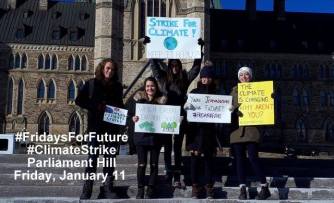 Traditional media have provided fairly limited coverage of the stoic students who  protested in Canadian cities on January 11: from the  Waterloo Record, “On a bitterly cold day in Waterloo, a new type of protest begins”   (Jan. 12) and “Children and youth strike against climate change in Waterloo Region” at KitchenerToday.com (Jan. 11); “Students, climate activists protest provincial climate plan at Queen’s Park” (Jan. 13) from The Varsity, the student newspaper of University of Toronto; and “I want to know the earth will be ok” from the Winnipeg Sun (Jan. 11).  CBC Vancouver reported the previous student climate strike on December 7 ; others are listed in the Work and Climate Change Report summary from December .

And another Canadian youth group to watch:  PowerShift: Young and Rising, who are gathering in Ottawa on February 14 – 18 .  From their announcement: “We will dig deep into discussions on topics including fracking, pipeline politics, Indigenous sovereignty, divestment, and green jobs. We will learn how to make lasting change through community organizing, direct action, art, storytelling, and using traditional and digital media. … PowerShift aims to ensure that once the convergence is over, the youth climate movement continues to grow through our networks, continued capacity building, and strategic action.”