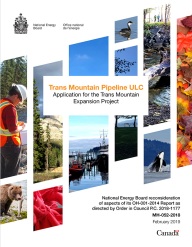 In headline news on February 22,  Canada’s National Energy Board released the Report of its Reconsideration process (here in French), and for the second time, approved construction of the Trans Mountain Pipeline.  The NEB states: “…Project-related marine shipping is likely to cause significant adverse environmental effects on the Southern resident killer whale and on Indigenous cultural use associated with the Southern resident killer whale. The NEB also found that greenhouse gas emissions from Project-related marine vessels would likely be significant. While a credible worst-case spill from the Project or a Project-related marine vessel is not likely, if it were to occur the environmental effects would be significant. While these effects weighed heavily in the NEB’s consideration of Project-related marine shipping, the NEB recommends that the Government of Canada find that they can be justified in the circumstances, in light of the considerable benefits of the Project and measures to minimize the effects.”

The decision was expected, and reaction was immediate:  From The Energy Mix “NEB Sidesteps ‘Significant’ Impacts, Recommends Trans Mountain Pipeline Approval”  , which summarizes reaction;  from the National Observer in  “For a second time, NEB recommends approval of Trans Mountain pipeline expansion” (Feb. 22)  and  “NEB ruling sparks new vows to stop the Trans Mountain pipeline”.  An Opinion piece by Andrew Nikoforuk in The Tyee  is titled, “NEB ‘Reconsideration Report’ a New Low for Failing Agency” and from the Council of Canadians, “The fight to #StopTMX Continues as feds approve their own pipeline” .  From British Columbia, where the government has appeared as an intervenor against the pipeline , the Sierra Club reaction is here ; the Dogwood Institute pledged opposition (including a rally against the decision in Vancouver)  and pledged to  make the Trans Mountain project a major part of the federal election scheduled for Fall 2019;  and West Coast Environmental Law press release   also pledged continued opposition.  Albertans see it differently, with Premier Rachel Notley releasing a statement which sees the decision as progress, but not enough to be a victory, and states: “We believe these recommendations and conditions are sound, achievable, and will improve marine safety for all shipping, not just for the one additional tanker a day that results from Trans-Mountain.” It is important to note that not all Albertans are pro-pipeline: Climate Justice Edmonton is protesting with a  “People on the Path” installation along the route, and Extinction Rebellion Edmonton  actively protests fossil fuel development.

Meaningful Indigenous consultation still needed :  The NEB Reconsideration process was triggered by an August 2018 decision of the Federal Court of Appeal, which ordered the NEB to re-examine especially the potential impacts of marine shipping on marine life, and the potential damages of an oil spill. The Reconsideration report has resulted in 16 new recommendations on those issues, along with the existing 156 conditions.   Although the final decision on the project rests with Cabinet, the issue of meaningful Indigenous consultation is still outstanding from the order of the Court of Appeal.  According to the CBC, “Ottawa has met already with three-quarters of Indigenous communities during Trans Mountain consultation reboot” as of Feb. 20, but also according to the CBC, the Union of B.C. Indian Chiefs says “We still say no to the project.

Even if one nation, one community says no, that project is not happening”  . And the Tiny House Warriors  continue to occupy buildings along the pipeline path, to assert their authority over the land.

Canada ignores GHG impacts while Australia rules against a coal mine on GHG grounds….  A motion was brought by the environmental group Stand.earth, demanding that the NEB reconsideration of Trans Mountain include consideration of its upstream and downstream greenhouse gas emissions, as had been done in the Energy East consultation. Stand.earth stated: “The board cannot possibly fulfill its mandate of determining whether the project is in the public interest without considering whether the project is reconcilable with Canada’s international obligations to substantially reduce GHG emissions.” An article in the National Observer,   “IPCC authors urge NEB to consider climate impacts of Trans Mountain pipeline expansion” summarizes the situation and quotes Tzeporah Berman, international program director at Stand.earth, as well as Marc Jaccard and Kirsten Zickfeld, two professors from Simon Fraser University.  On February 19, the National Energy Board ruled on the Stand.earth motion, refusing to expand the scope of their reconsideration. Council of Canadians reacted with  “NEB climate denial another Trudeau broken promise”  .

It is doubly disappointing that Canada’s National Energy Board declined to include climate change impacts in its assessment, in the same month that the Land & Environment Court of New South Wales, Australia upheld the government’s previous denial of a permit for an open cut coal mine.   According to a report in The Guardian,     the decision explicitly cited the project’s potential impact on climate change, writing that an open-cut coalmine in the Gloucester Valley “would be in the wrong place at the wrong time.… Wrong time because the GHG [greenhouse gas] emissions of the coal mine and its coal product will increase global total concentrations of GHGs at a time when what is now urgently needed, in order to meet generally agreed climate targets, is a rapid and deep decrease in GHG emissions.”  The decision was also covered in: “Court rules out Hunter Valley coal mine on climate change grounds” (Feb. 8) in the Sydney Morning Herald, and from the  Law Blog of Columbia University: “Big Climate Win Down Under: Australian Court Blocks Coal Mine Citing Negative Impacts of Greenhouse Gas Emissions”.