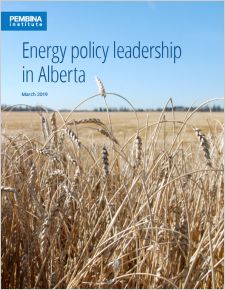 With a provincial election looming large in Alberta, the Pembina Institute released a new publication, Energy Policy Leadership in Alberta, on March 8,  with  this introduction: “Like most Albertans, we want to see the responsible development of oil and natural gas. The province’s policy and regulatory environment must ensure that our resources are produced in a manner that is both economically and environmentally sustainable. … Alberta’s future as an energy provider is directly linked to an ability to demonstrate a demand for its products in a decarbonizing world. With the right policies, Alberta can be competitive, attract investment, spur innovation and remain a supplier of choice in the global energy market.”  The 17-page document, intended to reach across political partisan thinking, continues by outlining 23 policy recommendations “to unleash innovative technologies, deploy renewables, promote energy efficiency, continue greening our fossil fuel industries, and reduce climate pollution.”

The Alberta government itself is active in getting out its story about its energy policies.  Most recently, the Alberta Climate Leadership Progress Report  was released in March 2019, documenting the fiscal year of April 1, 2017 to March 31, 2018 –  the first year Alberta collected a carbon levy.  The report states that a total of $1.19 billion of carbon revenue was invested back into the economy that year, and a press release of March 7  catalogues the impacts, including:

Further press releases from the government :

“Alberta solar on the rise“: (Feb. 15) announced a new contract for  solar electricity with Canadian Solar,  to run from 2021 to 2041,  at an average price of 4.8 cents per kilowatt hour, sufficient  to supply approximately 55 per cent of the government’s annual electricity needs while creating jobs in Southern Alberta.

“Premier’s plan unlocks $2-billion energy investment” (Feb. 20) announced that the province will provide up to $80 million in royalty credits, funded through the Petrochemicals Diversification Program , to support phase one of the a Methanol production project by Nauticol Energy  . Construction is scheduled to begin in 2020, with a commercial operational date set for 2022; the government states that the project will create “as many as 15,500 construction jobs and an additional 1,000 permanent jobs.”