The Fourth United Nations Environment Assembly (UNEA) convened from March 11 – 15 in Nairobi, Kenya, under the sombre cloud of the crash of Ethiopian Airlines which killed many, including Canadians, on their way to attend the meetings.

The flagship report, produced by 250 global scientists and experts, is the Sixth Global Environmental Outlook, which the UN press release calls “the most comprehensive and rigorous assessment on the state of the environment completed by the UN in the last five years .. warning that damage to the planet is so dire that people’s health will be increasingly threatened unless urgent action is taken.”  It warns that, without such urgent action,  cities and regions in Asia, the Middle East and Africa could see millions of premature deaths by 2050, with pollutants in freshwater systems leading to deaths through increased  anti-microbial resistance, as well as impacts on  male and female fertility and impaired neurodevelopment of children, from endocrine disruptors.  A 28-page  Summary for Policymakers   is available in multiple languages besides English, including French . 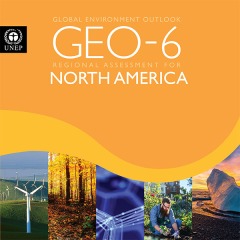 The official documents from the UNEA meetings are compiled here , including the closing press release summary, “World pledges to protect polluted, degraded planet as it adopts blueprint for more sustainable future” .

Other reports relevant to Canada:

1.The Assessment and Data Report for North America is one of the regional reports, all of which are compiled here .

2.  Global Resources Outlook 2019: Natural Resources for the Future We Want    examines the economic benefits and environmental costs of resource use, and finds that all resource sectors combined (including agriculture, mining, forestry ) account for 53% of the world’s carbon emissions. Extraction and primary processing of metals and other minerals  is responsible for 20% of health impacts from air pollution and 26% of global carbon emissions. The report warns that without change,  resource demand would more than double to 190bn tonnes a year, greenhouse gases would rise by 40% and demand for land would increase by 20%.   A summary of the report appeared in The Guardian.

3.   With a forecast even more dire than the 2018  IPCC report, Global linkages: A graphic look at the changing Arctic  warns that even if global emissions were to halt overnight, winter temperatures in the Arctic would still increase 4 to 5°C by 2100 because  of  greenhouse gases already emitted and ocean heat storage. The UNEA report warns of the dangers of thawing permafrost, predicting that by  2050, four million people, and around 70% of today’s Arctic infrastructure, will be threatened.  However, a critique by  the Carbon Brief    disputes this particular conclusion within the UNEA report, and states that  if humanity can mobilize to hit a -2 degrees C target, “future Arctic winter warming will be around 0.5 to 5.0°C by the 2080s compared to 1986-2005 levels, much lower than the 5.0 to 9.0°C values stated in the report.” … “This means that much of the future warming in the Arctic will depend on our emissions over the 21st century, rather than being ‘locked in’, as the report claims.” The Carbon Brief analysis is summarized in The  Energy Mix .