The United Steelworkers Union in Canada  produced a workshop guide, Climate Change and Just Transition: What will workers need? . The guide was piloted at the United Steelworkers National Health, Safety, Environment and Human Rights Conference in 2017, and released to the public in May 2019 by the Adapting Canadian Work and Workplaces to Respond to Climate Change (ACW), which was a partner on the project. The 47-page guide is designed to lead union members through discussion topics and activities, including general introduction to climate change concepts and vocabulary, and how climate change contributes to the world of work, particularly in the forestry, mining, and transportation industries where USW membership is concentrated. The Guide also discusses Just Transition and the Canadian experience, as well as areas of action for unions: Collective Agreements; Political Lobbying; Green Procurement; Training; and Employment Insurance.

A 2018 resource,  Communicating Climate Change and Energy in Alberta , focuses on how to talk to people effectively, and gives specifics about vocabulary and themes that are participative and non-confrontational.  Some highlights are cited in “Lessons in talking climate with Albertan Oil Workers” (Feb. 21), including:

“In Alberta, recognising the role that oil and gas has played in securing local livelihoods proved crucial. Most environmentalists would balk at a narrative of ‘gratitude’ towards oil, but co-producing an equitable path out of fossil fuel dependency means making oil sands workers feel valued, not attacked. Empathetic language that acknowledges oil’s place in local history could therefore be the key to cultivating support for decarbonisation.

…..This project was also one of the first to test language specifically on energy transitions. While participants were generally receptive to the concept, the word ‘just’, with its social justice connotations, proved to be anything but politically neutral. In an environment where attitudes towards climate are bound to political identities, many interviewees showed a reluctance to the idea of government handouts, even where an unjust transition would likely put them out of a job. Rather, the report recommends a narrative of ‘diversification’ rather than ‘transition’, stressing positive future opportunities instead of moving away from a negative past.”

The report was produced by the  Alberta Narratives Project, whose lead partners are The Pembina Institute and Alberta Ecotrust. It  is part of the global Climate Outreach Initiative,  whose goal is to understand and train communicators to deliver effective communications which lead to cooperative approaches.

The ACW also partnered with  the Coalition of Black Trade Unionists  to produce the training materials used for an Environmental Racism and Work workshop at the Indigenous and Workers of Colour Conference organized by the Toronto and York Region Labour Council on June 1st.  The 2-hour workshop was co-delivered by Patricia Chong (Asian Canadian Labour Alliance) and Chris Wilson (Coalition of Black Trade Unionists) – the Facilitator’s notes for the 2-hour workshop are here.  Related  training materials on environmental racism are described, with links, here . 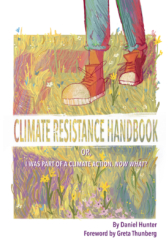 The Climate Resistance Handbook  was released by 350.org in May 2019, and meant to be used with their library of free training resources.  This handbook is directed at a general audience, especially young climate strikers, with very basic principles of building relationships, tactics, and moving from actions to strategic campaigns.  It includes the example of an organized action in 2014 at the National Energy Board against  TransCanada’s Energy East pipeline.