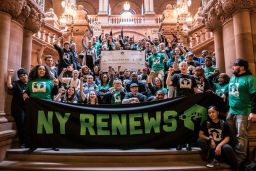 “New York Is About to Pass One of the Most Ambitious Climate Bills in the Land” in The Nation (June 19)  describes the political battles and compromises involved, and states “the real heroes of the fight for the CCPA are the hundreds of protesters who stormed the state Capitol on a recent Tuesday in June, and the dozens who staged a “die-in” outside the governor’s office to illustrate the consequences of failing to pass climate legislation.”  An article by David Roberts in Vox (June 20) also summarizes the nitty gritty of the bill and its evolution.

Planning under the new legislation will be led by a 22-member Climate Action Council, composed of the heads of various New York state agencies, along with members appointed by the governor, the Senate, and the Assembly. The Council will convene advisory panels on, for example, transportation, land use and local government, and will also convene working groups on Just Transition and Climate Justice.