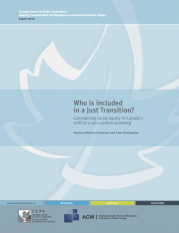 A new discussion of Just Transition in Canada was released in August 2019, Who is included in a Just Transition? Considering social equity in Canada’s shift to a zero-carbon economy.    Co-authors Hadrian Mertins-Kirkwood, senior researcher at the Canadian Centre for Policy Alternatives,  and Zaee Deshpande provide this introduction:  “After establishing a conceptual framework for just transition, including a distinction between reactive and proactive approaches, we analyze Canada’s existing transition policies to determine who is benefiting from them and who is excluded. We specifically consider gender identity, Indigenous status, racialized identity and immigrant status in our analysis of coal communities covered by the transition. We find that the main beneficiaries of present just transition policies are Canadian-born white men, which reflects their disproportionate presence in the coal workforce. However, many socially and economically marginalized people also face costs and risks from the same climate policies but do not share in the benefits of transition policies, which means these policies may lead to further marginalization.”  The conclusions are supported by the labour market analysis based on Statistics Canada employment data, combined with a synthesis of federal and Alberta Just Transition policies currently in place for the coal industry.  The paper makes a series of policy recommendations including targeted training, apprenticeship and education for people from marginalized groups.

The August report was co-published by  the Canadian Centre for Policy and  Adapting Canadian Work and Workplaces to Climate Change project (ACW), as was a 2018 report by  Mertins-Kirkwood, Making decarbonization work for workers: Policies for a just transition to a zero-carbon economy in Canada,  in which he sets out the distinctions between “reactive” and “proactive” Just Transition policies.  In November 2019, a related article by Mertins-Kirkwood and Ian Hussey, “A top-down transition: A critical account of Canada’s government-led phase-out of the coal sector,” will appear in the forthcoming international book Just transition(s): social justice in the shift towards a low-carbon world, to be published by Pluto Press .