With the federal election only weeks away on October 21, Justin Trudeau began to flesh out the Liberal Party climate change platform  with a campaign speech in Burnaby B.C. on September 24.  His speech, titled  A Climate Vision that Moves Canada Forward ,  promised that Canada would achieve net zero emissions by 2050, and announced that a re-elected Liberal government would halve the corporate tax rate for clean-technology businesses – from 9% to to 4.5 % for small business, from 15% to 7.5% for larger companies.  The Energy Mix summarized the clean tech proposals here  .

A CBC article provides a summary of a second round of Liberal climate change announcements which came on September 25. Trudeau, like the other leaders,  promised financial incentives to encourage energy efficiency retrofits, but  also promised to address the human costs of flood disasters through: creation of a low-cost national flood insurance program for homeowners in high-risk flood zones without adequate insurance protection; a national action plan to help homeowners at highest risk of repeat flooding with potential relocation; efforts to design an Employment Insurance Disaster Assistance Benefit to help people whose jobs and livelihoods are negatively affected by disaster; and to work with provinces and territories to update and complete flood maps to guide Canadians in home-buying decisions.

Looking for guidance on how to vote? 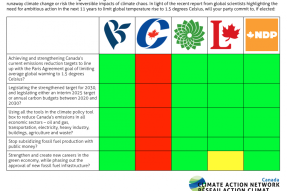 Although Elections Canada made the ground shaky  for environmental groups to speak publicly in the current election, some are stepping up with information.  Fourteen of Canada’s major environmental advocacy groups consolidated their priorities to produce a questionnaire, sent to the federal parties in July 2019.  The responses from five parties are here ; the People’s Party of Canada did not respond . Questions included: “Will you immediately legislate a climate plan that will reduce Canada’s emissions in line with keeping warming below 1.5°C?; Will your climate plan clearly and precisely describe programs to reduce emissions from transportation, buildings and the oil and gas sector? Will you ensure that workers and their families thrive during the transition to a low-carbon economy, by extending the Task Force on Just Transition to include all fossil fuel industries?; Will you create a Federal Environmental Bill of Rights that formally recognizes the legal right to a healthy environment?”.

Climate Action Network Canada was one of the fourteen, and had released Getting Real about Canada’s Climate Planin June, intended as “a baseline against which we can assess federal parties’ climate plans.” EcoJustice was also part of the collaborative questionnaire, but has  posted its own analysis of the party platforms here . Macleans magazine has compiled their own guide to the platforms on all issues here ; on environment and climate change issues here  and on energy policy (including pipelines)  here .

A sampling of Opinions:

“Climate change the sword as Liberal and Conservatives battle for power” in the National Observer https://www.nationalobserver.com/2019/09/25/news/climate-change-sword-liberal-and-conservatives-battle-power  (Sept. 25), which describes the competing political rhetoric in the wake of Trudeau’s first announcement;

Clean Energy Canada issued a press release on October 1,  stating: “The platform identifies similar areas of focus as the NDP and Green plans: more and cleaner public transit, increasing the number of zero-emission vehicles on the road, generating more clean power, and building and retrofitting more energy efficient homes. While not as aggressive as those plans, the proposed policies, programs, and investments are generally laid out in greater detail….The Liberal plan is unique, however, in its identification of electrification as a strategic opportunity to make Canadian industries and manufacturing the cleanest in the world, supported by a proposed $5-billion Clean Power Fund sourced from the Canada Infrastructure Bank. “

Simon Donner, professor of climatology at the University of British Columbia  writes in Policy Options (Oct. 1): “Despite lofty claims and aspirational goals, there is no Canadian plan consistent with avoiding 1.5°C or 2°C warming. Wherever you are on the political spectrum, the rhetoric of your party on climate change does not match the numbers.” His article was featured in the Toronto Star .

“This week in climate inaccuracy: Climate strike poses” by Chris Turner in The National Observer (Sept. 30) is the first in a promised series of critiques of all parties.

“On climate change, the Liberal  plan (mostly) adds up”, an Editorial in the Globe and Mail (restricted access)  (Oct.1).