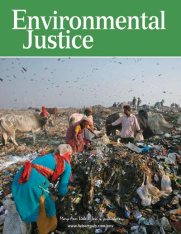 The  November issue of the journal Environmental Justice includes “Time is Up: Social workers take your place at the climate change table” ( free access only until November 22, 2019). The authors maintain that “Social workers are uniquely situated to be involved, with their training in social policy, legislative advocacy, and community organizing, in combating the negative effects of climate change and the inherent social justice issues associated with this issue. However, …. they must be trained on topics such as disaster-specific trauma, bereavement, and resource disruption.

The article begins with a broad overview of policies related to climate change – including the Kyoto Protocol and the Paris Climate Agreement, but the main focus is on social workers in the United States as actors in climate change.  Based on reviews of the social work literature between 2008 and 2019, the authors conclude that what little has been written has focused on consequences and/or coping strategies after a natural disaster. They  also conclude that  most of the climate-related training of social workers is occurring outside of the United States in countries such as Australia and New Zealand.

The article reveals how the professional organization,  the American Academy of Social Work and Social Welfare, has viewed the climate emergency.  The AASWSW issued its  12 Grand Challenges for Social Work in 2016, and it included a goal to “Create social responses to a changing environment”. A separate Policy Briefing outlines amibitious goals, including: (1) adopt and implement evidence-based approaches to disaster risk reduction, (2) develop policies targeting environmentally induced migration and population displacement, and (3) strengthen equity-oriented urban resilience policies and proactively engage marginalized communities in adaptation planning.  A 2015 background paper preceded the goal statement:  Strengthening the Social Response to the Human Impacts of Environmental Change .

The latest issue of the Association’s journal Social Work Today  is a progress report on the Grand Challenges. Regarding the changing environment, it reports that the Association has been advocating for the Green New Deal, and will “examine the social work implications of the proposed Green New Deal and to call social workers to action around environmental justice policies.”  It concludes:

“One of the greatest challenges toward continued progress is in making social workers aware of their role and responsibility in addressing both the causes and consequences of climate change,” …. Many social workers feel there are more immediate issues to deal with, even if they acknowledge the seriousness of the problem.”