The Human Rights Commission of the Philippines has concluded its three-year investigation of a complaint led by Greenpeace South-East Asia , and has found that the collective contribution to global heating by 47 coal, cement, and oil and gas companies has violated Filipinos’ basic human rights to life, water, food, sanitation, adequate housing and self-determination. Although the full decision is not yet available – but promised by the end of 2019 – the announcement made by one of the Commissioners at the COP25 meetings  stated that it would be up to individual countries to pass strong legislation and establish legal liability in their own courts, but that “there was clear scope under existing civil law in the Philippines to take action.”

The  Director of Greenpeace Philippines is quoted in the Greenpeace press release:

“The findings are a landmark victory for communities around the world who are at the frontlines of the climate emergency. This is the first ever finding of corporate responsibility for human rights harms resulting from the climate crisis. The outcome goes beyond the Philippines and can reach every single human being alive or yet to be born. However, this is only the beginning. We believe the findings provide very strong basis not just for future legal actions against big polluters, but also for citizens and communities to confront inaction by companies and governments in the streets and in the hallways of power.”

Greenpeace maintains an archive of documents related to this long-running investigation, including corporate responses and expert opinions.  Climate Liability News has published a number of articles, including “Carbon Majors Can Be Held Liable for Human Rights Violations, Philippines Commission Rules” and  “Philippines Climate Case Could Find Fossil Fuel Companies Violate Human Rights” ( 2017), which  provides more background to the case.

Update:  On December 18, The Tyee published “Oilsands Firms ‘Morally Responsible’ for Deaths and Destruction from Climate Disasters”, an interview by Geoff Demicki with Greenpeace’s Naderev Yeb Saño , which “explains what a Philippines human rights investigation means for the fossil fuel industry in Canada.” 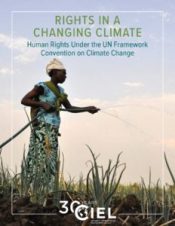 Related: An authoritative chronicling of  the human rights dimension in UNFCCC decisions and the Paris Agreement appears in  Rights in a Changing Climate by the Centre for International Environmental Law , published on December 5. It includes examples of Just Transition and decent work. The CIEL also operates a Working Group on Climate Rights, with a dedicated website here.

“Fossil Fuels on Trial: Where the Major Climate Change Lawsuits Stand Today”  was published by Inside Climate News on November 29, providing a good sum-up of the year, but too early to reflect the landmark Philippines decision, nor the December 10 decision in the suit by the New York Attorney General against  Exxon.  The surprising victory for Exxon is described in  “Judge Clears Exxon in Investor Fraud Case Over Climate Risk Disclosure”  in Inside Climate News, as well as in a New York Times article.