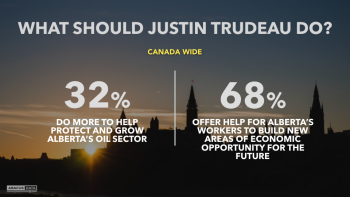 An online survey  was conducted by Abacus Data in mid- December 2019 to gauge opinion about an energy transition and compare attitudes in Alberta with those in the rest of Canada. The summary was posted to the Abacus website on January 3 and to Clean Energy Canada, which commissioned the survey, here .  Based on responses from a random sample of 1,848 adults,  a majority of Canadians and Albertans recognize that energy transition is a global issue and a necessary development, although in Alberta, only 49% see it as beneficial for the province in the long-term.

72% across Canada, and 60% in Alberta would prefer to see Alberta’s economy shift over time because “global demand will change and Alberta will be left behind if the province is more dependent on oil.”

57%  of Albertans said an energy transition should be done more slowly or not at all, and 45% see it as intended to punish Alberta’s workers.