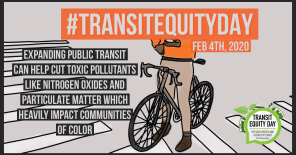 Transit Equity Day in the United States was held on February 4 – a date chosen to honour Rosa Parks, whose refusal to yield her seat on a bus in 1955 was the catalyst in the U.S. struggle against the segregation of public transit.  Now in 2020, Transit Equity Day’s main goal is “to promote environmentally-sustainable and affordable transit accessible to all, regardless of income, national origin, race, gender identity, sexual orientation, age, religion, or ability,” and in all communities, rural or urban.  In addition to social justice goals, it also promotes climate justice and workplace justice, calling for good, union jobs for transit workers and those who manufacture transit equipment, as well as a  just transition for workers and communities in the  transition to an electrified, non-polluting transit system.  Transit Equity Day is organized by the Labor Network for Sustainability, in cooperation with environmental and labour groups already working to promote public transit – including the Amalgamated Transit Union , Transport Workers of America, Connecticut Roundtable for Climate and Jobs , Metropolitan Washington District AFL-CIO, and Jobs to Move America .

Transit Equity Day also supports the growing free public transit movement – described, with global case studies, in Free Public Transit: And Why We Don’t Pay to Ride Elevators, a book published in Canada by Black Rose books in 2017.  Since then, advocates have focused mainly on the social justice arguments: for example in  “Free and Accessible Transit Now: Toward A Red-Green Vision for Toronto” (Canadian Dimension, May 10 2018) . This continues to be the focus in the July 2019 call for free transit by the Canadian Union of Public Employees (CUPE) Local 2, representing Toronto Transit Commission workers,  and endorsed by CUPE Ontario. Also in a January 2020 blog by the Amalgamated Transit Union in Canada , which stated:

ATU Canada advocates for fares to be affordable for all, and advocates for progress toward creating a fare-free transit. Incremental pricing actions (such as fare-freezes and reductions) are realistic in lieu of immediate fare-free transit subsidized by government. In our advocacy, we prioritize efforts to eliminate cost barriers to accessing jobs, education, health care, and other services, through the implementation of low-income passes. A gradual approach to fare reduction is sorely needed in many municipalities across Canada, with the ultimate goal of ensuring that transit is safe, reliable, and affordable for all.”

The Richochet published two articles which marry concern for social justice with the well-established environmental benefits of transit over cars:  “Advocates say decommodified housing and free transit needed to fight climate emergency” (Oct.9)  describes activism in  Montreal, and “Free public transit is key to any Green New Deal worthy of the name” (Oct. 19)  which is an overview of the growing activism Canada-wide. “The case for free public transit in Toronto” in Now Magazine (Dec. 2019) only begins to discuss the fraught transit politics in Toronto. In December 2019, members of the Free Transit Edmonton movement published an Opinion piece: “Make transit free for the sake of our climate and community” in the Edmonton Journal.  For a recent U.S. summary, see “Should Public Transit Be Free? More Cities Say, Why Not?” in the New York Times (Jan. 14).