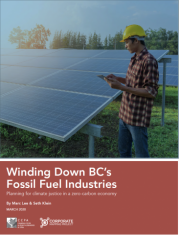 Winding Down BC’s Fossil Fuel Industries: Planning for climate justice in a zero-carbon economy   was released on March 4  by the B.C. office of the Canadian Centre for Policy Alternatives, as part of the Corporate Mapping Project.  Authors Marc Lee and Seth Klein begin with an overview of the province’s  fossil fuel industries (including locations, production and reserves)  noting that all fossils produce one-quarter of B.C.’s GHG emissions, (most of which is from Liquified Natural Gas (LNG)). Calling the government’s current strategy of promoting LNG production through clean electricity “untenable”, the report proposes a four-point phase-out plan for all fossils over the next 20 to 30 years, including: 1. Establish carbon budgets and fossil fuel production limits; 2. Invest in the domestic transition from fossil fuels and develop a green industrial strategy; 3. Ensure a just transition for workers and communities; 4. Reform the royalty regime for fossil fuel extraction.

To design a Just Transition plan, the authors cite as “helpful” the examples of the Alberta coal phase-out and the 2018 coal phase-out agreement in Spain, as well as the existing Columbia Basin Trust example of community transition.  In the long time frame of 20 to 30 years, they see the retirement of many existing workers, so that attrition will accomplish much of the job shedding. Although they say that Just-transition strategies “must include efforts to maintain employment in areas where jobs are likely to be lost” – implying reinvestment in resource-based communities – they also recognize the built-in gender bias of such a strategy and advocate investment in  public sector jobs – such as child care and seniors services.

“ ….BC should aim to invest 2 per cent of its GDP per year … or about $6 billion per year in 2019, an amount that would grow in line with the provincial economy. Assuring such levels of investment should give comfort to workers currently employed in the fossil fuel industry. Revenues from higher carbon taxes and royalty reforms (described below) would be an ideal source of funds, and/or governments could borrow (through green bonds) to undertake high levels of capital spending on decarbonization initiatives. In contrast, the 2019 BC Budget lists total operating and capital expenses for CleanBC over the next three years at, cumulatively, only $679 million, less than one-tenth of a percent of BC’s GDP.”

The authors state: “On average, fossil fuel workers make 28 per cent more than workers in the rest of the economy, although this includes gasoline station workers who earn  comparably low wages. Replacing more than $5 billion of income over the course of the wind-down period is therefore a central challenge”…. By assuming a 20 to 30 year time frame, they calculate a job substitution of 500 to 700 jobs per year, and state: “ There is no reason to believe that such a transition should be a problem if the right policy supports are implemented and a proactive green investment strategy is pursued to create alternative employment options.”  Earlier in the report, the authors estimate that, assuming the province invests 2 per cent of its GDP annually (about $6 billion in 2019) in green job creation, at least 42,000 direct and indirect jobs would be created  in a range of opportunities.

The CCPA offers an 8-page Executive Summary of the report, and an even briefer version , written by co-author Marc Lee, was published in the Vancouver Sun on March 8.