A public review of Canada’s Building Codes (building, energy, and fire) was open from January 13 to March 13, 2020, under the National Research Council of Canada . The Canadian Green Building Council and the Royal Architectural Institute of Canada sent a joint letter with three recommendations :  First, that  “the code requirements should address not only energy efficiency, but also the carbon emissions associated with construction and operations.”  2. Add operational GHG intensity metrics :  “The National Model Energy Code for Buildings (NECB) and the National Building Code (NBC) should include the addition of operational GHG intensity metrics in order to better align code outcomes with the objectives of the Pan Canadian Framework on Clean Growth and Climate Change.”  3. Develop embodied carbon metrics:  “The next update to the code should include embodied carbon reduction targets using a comparative approach where proposed buildings are compared to a baseline version of the same building.”

The Pembina Institute also made a Submission,  summarized in a press release on March 13 , and available in full, here.   Like the CGBC, the Pembina submission calls for GHG intensity metrics in addition to energy efficiency metrics, and goes further  in calling for  a cap, rather than targets, for the embodied carbon associated with buildings.  In a separate OpEd on April 15,  the Pembina Institute calls for government to “ramp up”  all green-building funding models over the next five years, with the goal of retrofitting half of Canada’s building stock by 2030. 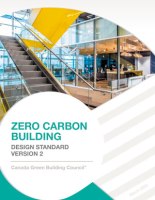 In the meantime, while government deliberates over the changes to the country’s building codes, the Canadian Green Building Council released  Version 2 of its Zero Carbon Building Standard on March 10, updating the previous version from 2017. The ZCB Standard version 2 itself has two components: ZCB-Design, for  new buildings as well as the retrofit of existing structures, and ZCB-Performance, which provides a framework for annual verification that buildings have achieved zero carbon. The Zero Carbon Building Standard 2 technical documents are here    .  Updates from version 1 are highlighted in the  press release , and relate to: 1.  Embodied Carbon: (Projects must now reduce and offset carbon emissions for the building’s life-cycle including those associated with the manufacture and use of construction materials.); 2. Refrigerants: (v.2 “ encourages” best practices to minimize potential leaks of refrigerants ); 3. Energy Efficiency: ( more stringent energy efficiency and airtightness requirements), and 4. Innovation: (requires projects demonstrate two innovative strategies to reduce carbon emissions) .

The Canadian Green Building Council published its landmark study in February 2019, Making the Case for Building to Zero Carbon . It demonstrates that that zero carbon buildings can provide a positive financial return over a 25-year life-cycle, inclusive of carbon pollution pricing, and requiring only a modest capital cost premium.