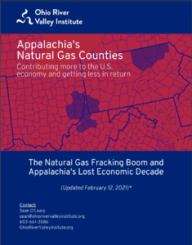 A February study examined the economic changes in 22 counties the authors call “Frackalachia” –  home to the Utica and Marcellus shale gas industry.  The report, Appalachia’s Natural Gas Counties: Contributing more to the U.S. economy and Getting less in return  examines the period from 2008 to 2019, a time when  the area went from producing a negligible portion of U.S. natural gas to producing 40%. The report summarizes the job forecasts provided by oil and gas industry economic impact studies, (over 450,000 new jobs for Ohio, Pennsylvania, and West Virginia), and shows the actual economic data from the U.S. Bureau of Economic Analysis –  a 1.6% increase in jobs  – at a time when the number of jobs across the U.S. grew by 9.9%.  Detailed statistics demonstrate the differences amongst counties and states – with Ohio faring the worst and Pennsylvania faring the best. The report’s analysis shows that in the entire area represented by the 22 counties, the share of the national personal income fell by 6.3 percent, the share of jobs fell by 7.5 percent, and the share of the national population fell by 9.7 percent , while  90% of the wealth generated from fracking left the local communities.

The report was produced and published on February 10  by the Ohio River Valley Institute, a non-profit think tank based in Pennsylvania, founded in 2020 with the vision of “moving beyond an extractive economy toward shared prosperity, lasting job growth, clean energy, and civic engagement.”  This report has been widely reported, including in “Appalachia’s fracking boom has done little for local economies: Study”(Environmental Health News , Feb. 12),  which summarizes the report and adds context concerning the health effects of fracking, and the failed attempts to expand production to  petrochemicals and plastics using ethane, a by-product of the fracked natural gas.