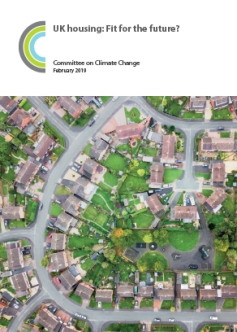 The  U.K.’s Committee on Climate Change released a new report on February 21, U.K. Housing – Fit for the Future? , assessing how well U.K. housing  is prepared for the impacts of climate change, including heat waves and flood risks. Energy use in Britain’s 29 million homes accounts for 14% of current GHG emissions, and the report concludes that the U.K. cannot meet its present climate targets without major improvement in the housing sector.  The report states that energy use in homes actually  increased between 2016 and 2017, with many energy efficiency initiatives stalled and standards and policies weakened or not enforced.  The report identifies 5 priorities and makes 36 recommendations to improve that performance, with a goal  to reduce emissions by 24 % by 2030 from 1990 levels.

One of the five priority areas needing urgent change is “the skills gap”.  The report states: “Regular changes to key policies have led to uncertainty and poor focus on new housing design and construction skills in the UK. The UK Government should use the initiatives announced under the Construction Sector Deal to tackle the low-carbon skills gap. …. Professional standards and skills across the building, heat and ventilation supply trades need to be reviewed, with a nationwide training programme to upskill the existing workforce, along with an increased focus on incentivising high ‘as-built’ performance. There is an urgent need for further work to ensure that low-carbon heat and mechanical ventilation systems are designed, commissioned and installed properly, and that householders are supported to use them effectively. Similar efforts are needed to develop appropriate skills and training for passive cooling measures, water efficiency, property-level flood resilience and Sustainable Drainage Systems (SuDS).”

The Paper Trail of Government Reports:  The Construction Sector Deal  referred to is a 2018 policy paper, part of the larger Industrial Strategy exercise, which includes a “People” section , which describes very specific proposals to improve training and apprenticeship programs under the industry-led Construction Industry Training Board (which was itself reviewed in 2018).  The 2018 Construction Sector Deal built upon Construction 2025,  which was a vision paper of government and industry working together, released in 2013.

A different perspective from the government-industry reports appears in an article by   Linda Clarke, Colin Gleeson, and Christopher Winch in 2017, “What kind of expertise is needed for low energy construction?” which appeared in the journal Construction Management and Economics.  The authors, from ProBE , the Centre for the Study of the Production of the Built Environment at University of Westminster,   sketched out the essence of the problem, stating: “There is a lack of the expertise needed for low energy construction (LEC) in the UK as the complex work processes involved require ‘energy literacy’ of all construction occupations, high qualification levels, broad occupational profiles, integrated teamworking, and good communication.”  Their proposed prescription for low energy construction  was “a transformation of the existing structure of VET provision and construction employment and a new curriculum based on a broader concept of agency and backed by rigorous enforcement of standards. This can be achieved through a radical transition pathway rather than market-based solutions to a low carbon future for the construction sector.” 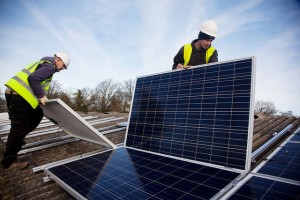 Three recent studies from University of California at Berkeley provide evidence of the job benefits of clean energy industries.  The first,“Diversity in California’s Clean Energy Workforce”, from Berkeley’s Center for Labor Research and Education Green Economy Program, claims to be the first quantitative analysis of who is getting into apprentice training programs and jobs on renewables. It states that  “ Joint union-employer apprenticeship programs have helped people of color get training and career-track jobs building California’s clean energy infrastructure”.   The authors attribute this to the recruitment efforts by unions, as well as the location of many renewable power plants in areas where there are high concentrations of disadvantaged communities.  It  presents data for the ethnic, racial and gender composition of enrollment in apprenticeship programs in 16 union locals for electricians, ironworkers and operating engineers. The report finds significant variation in racial and ethnic diversity amongst  unions,with women’s participation minimal, (ranging from 2 – 6%) in all cases. Uniquely, the study also examined the impact of clean energy construction on disadvantaged workers, finding that  43% of entry-level workers live in disadvantaged communities, and 47% live in communities with unemployment rates of at least 13%.  Further, it states:  “Most large-scale renewable energy plants have been built under project labor agreements. These agreements require union wage and benefit standards and provide free training through apprenticeship programs.” 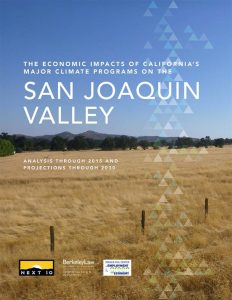 Two other reports were released by the Center for Labor Research and Education, the Center for Law, Energy and the Environment (CLEE) at UC Berkeley Law,  and advocacy group Next 10.   The Economic Impacts of California’s Major Climate Programs on the San Joaquin Valley: Analysis through 2015 and Projections to 2030 (January)   and  The Net Economic Impacts of California’s Major Climate Programs in the Inland Empire: Analysis of 2010-2016 and Beyond  (August)  examine the impact of climate programs on  California’s most environmentally vulnerable regions.  The “Inland Empire” (defined as the counties of San Bernardino and Riverside) report , examined four key policies: cap and trade, the renewables portfolio standard, distributed solar policies and energy efficiency programs.  These policies were found to have brought a net benefit of $9.1 billion in direct economic activity and 41,000 net direct jobs from 2010 to 2016 .  Policy recommendations to continue these benefits:  “reward cleaner transportation in this region; help disburse cap-and-trade auction proceeds in a timely and predictable manner; and create robust transition programs for workers and communities affected by the decline of the Inland Empire’s greenhouse gas-emitting industries, including re-training and job placement programs, bridges to retirement, and regional economic development initiatives.”

The three reports were released to be part of the public debate about extending the cap and trade legislation (passed in July) and about California’s Senate Bill SB100 , which passed 2nd reading in the legislature on September 5.  SB100 would toughen existing targets to  60% renewable electricity by 2030, and  require utilities to plan for 100% renewable electricity by 2045 .

On  June 2, New York Governor Andrew Cuomo announced that his state would invest $1.5 billion in renewable energy projects through the Clean Climate Careers Initiative.  The program has three elements:  “supercharge” clean energy technologies, create up to 40,000 clean energy jobs by 2020, and  achieve environmental justice and Just Transition for underserved communities. Both the Governor’s press release and one from the Worker Institute at Cornell University Industrial and Labor Relations School attribute the inspiration for the new renewable energy initiative to the  “Labor Leading on Climate” program at the Worker Institute. 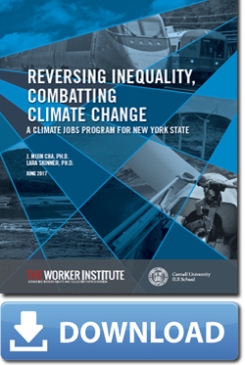 The  Institute has just published Reversing Inequality, Combatting Climate Change: A Climate Jobs Program for New York State (June 2017),  in which Lara Skinner and  co-author J. Mijin Cha argue for an “audicious”  job creation plan which would create decent green jobs in the building, energy, and transport sectors.  The report provides case studies and specific proposals to reduce GHG emissions – for example, to retrofit all public schools in the state to reach 100 percent of their energy efficiency potential by 2025, reduce energy use in all public buildings by 40 percent by 2025, install 7.5 GW of offshore wind by 2050,  rehabilitate New York City public transit, and construct and improve the existing high-speed passenger rail corridor between Albany and Buffalo, and between New York City and Montreal.  The report also includes a recommendation to establish a Just Transition Task Force – a recommendation incorporated in Governor Cuomo’s plan.

In the plan announced  by Governor Cuomo, $15 million has been committed “to educators and trainers that partner with the clean energy industry and unions to offer training and apprenticeship opportunities, with funding distributed to the most innovative and far-reaching apprenticeship, training programs and partnerships.  ”  The state is also committed to the use of a Project Labor Agreement framework for the construction of public works projects associated with the initiative.

Governor Cuomo’s  Renewable Energy initiative was announced one day after Donald Trump’s  withdrawal from the Paris Climate Accord, and after the Governor had signed an Executive Order  reaffirming New York’s  commitment to the Paris goals, and had launched a Climate Alliance with the states of California and Washington.

The Adapting Canadian Work and Workplaces to Climate Change research project has released two  papers relating to the built environment, and more specifically, the accomplishments of one labour union in British Columbia to  promote major climate change improvements in the construction industry.  Evaluating the Impact of the BC Insulators’ Union Campaign to Promote Improved Mechanical Insulation Standards in BC’s Construction Industry   (April 2016) described the campaign by  BC Insulators union Local 118 to encourage municipalities in B.C. to require higher insulation standards in their building requirements and procurement contract tenders.  To do this, the union “funded independent, technical research papers, commissioned best practice manuals with detailed guidelines on installing MI and initiated an extensive and carefully organized public education campaign to pressure industry and government to raise standards. It approached municipalities, building contractors, government officials, property developers, industry professionals and trade organizations to alert them to the importance of reducing the energy footprint of buildings. It pressured governments to raise MI standards in procurement of new and refurbished buildings and implement tougher requirements in their building codes. And it introduced climate change literacy into the curriculum of the apprenticeship system it oversees.” 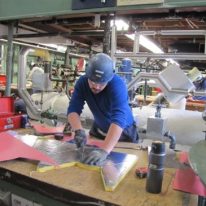 The climate literacy curriculum is the subject of a new report released in April 2017: Promoting Climate Literacy in British Columbia’s Apprenticeship System: Evaluating One Union’s Efforts to Overcome Attitudinal Barriers to Low Carbon Construction   describes  the ‘Green Awareness’ course the union provides as part of the apprenticeship training for  all mechanical insulation trades workers in British Columbia. The two-module course was introduced in 2011 and is taught over the course of the first two years of the four-year program.  After conducting a review of the ‘Green Awareness’ course content, the research team performed qualitative interviews with a cohort of 2nd and 4th year apprentices to determine how effective the training had been.   These findings indicate the need for further refinements in the content and delivery of the ‘Green Awareness’ course material. The authors conclude that incorporating climate change-related course content into the training process is an important step in fostering climate literacy within the industry and should be encouraged in other trades. They caution, however, that its degree of impact will be limited unless more sweeping changes are made to the organization and culture of the construction industry itself.

Both papers were authored by John Calvert and Corinne Tallon.  The evaluation of the climate literacy program was presented at the International Labour Process Conference (ILPC), Sheffield, United Kingdom, April 4 – 6, 2017.

Like Loading...
A study released on November 10 by the University of California at Berkeley examines the environmental and economic impact of a boom in utility-scale solar electricity generation in California since 2010.
The report describes the overall economic and policy situation, then calculates the new construction, maintenance, and operations jobs created, plus the upstream and downstream jobs. It estimates the income and health and pension benefits of these new construction and plant operations jobs, most of which are unionized.
In California, the union contracts have required payments into apprenticeship training programs; the study calculates the new monies that have been generated for apprenticeship programs, and asserts that the boom in utility-scale solar construction has set in motion a related boom in apprenticeship and other forms of training for electricians, operating engineers, ironworkers, carpenters, millwrights, piledrivers, and laborers. The author estimates how apprenticeship affects lifetime earnings- using the example of electrical apprentices, who are estimated to see a lifetime income approximately $1 million higher than that of workers without similar training.
Finally, the report describes the policy environment that has facilitated this solar boom, and makes recommendations for the future. The author, Peter Philips, from the University of Utah, is currently a Visiting Scholar at the UC Berkeley Institute for Research on Labor and Employment, at the Donald Vial Center on Employment in the Green Economy.