On October 26, Ontario’s Minister of Energy  released the 2017 Long-Term Energy Plan – Delivering Fairness and Choice, an update of previous versions in 2010 and 2013.   Clean Energy Canada states “Ontario’s long-term energy plan provides more direction than details, but it stays the course in building a modern, affordable and flexible energy system.”  Others, such as the Ontario Clean Air Coalition,  have concerns that the continuing commitment to nuclear power generation comes at the expense of development of renewables.  While the policy seems to focus on the political task of making energy more affordable and giving consumers more energy options, some noteworthy goals relate to “ enhancing net metering by allowing more people the opportunity to produce clean energy and use it to power their homes and lower their electricity bills. ” … “Allowing utilities to intelligently and cost-effectively integrate electric vehicles into their grids, including smart charging in homes”   … and increased oversight of fees charged by private providers “strengthening protection for vulnerable consumers in condominiums and apartments to protect them from energy disconnection in winter.”  Key reading from the LTEP: Chapter 6 Responding to the challenge of climate change  . The next step is for the Ontario Energy Board and the Independent Electricity System Operator to submit implementation plans to the Minister of Energy for approval.

The LTEP summarizes Ontario’s energy policies to date and forecasts demand for the future. For more detail and analysis on those aspects, see the CBC,  or  “Hydro Prices to keep rising just a bit more slowly” in the Ottawa Citizen (Oct. 26) which points out that the province is forecasting almost flat demand for electricity for the next 20 years, as conservation and efficiency savings are traded for  increased demand for electric vehicles and transit. (the report assumes  2.4 million electric vehicles will be on the roads by 2035).

Controversy surrounds the role of nuclear power in the plan.  The Power Workers Union,  which continues to lobby for nuclear power , calls the new LTEP “good news for the environment and the economy”  in their press release , stating:    “Today’s latest provincial Long-Term Energy Plan (LTEP) confirms the pivotal role nuclear energy will play in Ontario’s clean energy future.  Recognizing the significant environmental and economic benefits that this safe, reliable generation delivers, the provincial government remains committed to refurbishing all of Ontario’s publicly-owned nuclear reactors and to the four-year extension of the operations of the Pickering Nuclear Generating Station to 2024”.  In contrast, the Ontario Clean Air Coalition reacted with “Ontario doubles down on obsolete nuclear – and you’re paying for it” , which states: “Ontario’s fixation with obsolete nuclear energy is to say the least puzzling, but what is clear is that this fixation is going to cost us dearly. Please sign our petition calling on Premier Wynne to make a deal with Quebec to lower our electricity costs and to open the way for a modern renewable energy system. ”  In a similar vein, the David Suzuki Foundation press release states:  “Ontario’s new Long-Term Energy Plan is both encouraging and worrisome. The former because it recognizes the importance of clean air and addressing climate change; the latter because of its embrace of nuclear power and its lack of a road map to expand renewable energy.” … “ the province’s continued reliance on nuclear for about half its power is troubling. In addition to concerns around uranium mining and waste disposal, nuclear has not proven to be cost-effective.”

In its fourth annual report, Renewable Energy and Jobs – Annual Review 2017 , the International Renewable Energy Agency (IRENA) presents statistics on renewable energy employment, both by technology and in selected countries.  For this 2017 edition, it includes statistics for large-scale hydropower, and also the results for a workplace survey in the Middle East and North Africa on barriers to women in clean energy labour markets.   The worldwide statistics show that renewable energy employed 9.8 million people in 2016 – a 1.1% increase over 2015.  Solar photovoltaic (PV) power was the largest employer, with 3.1 million jobs (an increase of 12% from 2015); global wind employed 1.2 million  people (an increase of 7%); large hydro employed 1.5 million people, with around 60% of those in operation and maintenance. However, given that Canada is the world’s 2nd biggest hydropower producer (after China), and that Canada is not included in the IRENA numbers, this figure could be questioned.  China, Brazil, the United States, India, Japan and Germany accounted for most of the renewable energy jobs.

In general, IRENA reports that the rate of for renewable job growth slowed down in  2015 and 2016, with the exception of the solar PV and wind categories, which have more than doubled since 2012. In contrast, employment in solar heating and cooling and large hydropower has declined.  Nevertheless, IRENA predicts that “the number of people working in the renewables sector could reach 24 million by 2030, more than offsetting fossil-fuel job losses and becoming a major economic driver around the world”.  It also notes that ”significant efforts in training and education is needed to provide the labour market with the required skills.”

The  gender discrimination survey of labour markets in the Middle East and North Africa was  conducted jointly by IRENA, the Clean Energy Business Council (CEBC) and Bloomberg New Energy Finance (BNEF). The   survey found that discrimination seems less pronounced in renewable energy employment than in the energy sector at large, but “challenges remain for women in regard to employment and promotion.” 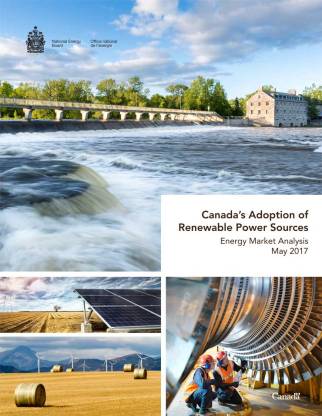 A Canadian Press story in early May highlighted that renewable energy accounted for 66% of energy generated in Canada in 2015, and appeared widely –  for example, in  the Globe and Mail (May 2) and the Toronto Star . The information behind the news was drawn  from  Canada’s Adoption of Renewable Power Sources – Energy Market Analysis May 2017  by the National Energy Board , which provides much more detail about each type of renewable energy, and notes the factors influencing their adoption rates (including costs, technological improvement, environmental considerations, and regulatory issues).  The NEB also compares  Canada to other countries, and perhaps most interestingly,  includes a section on Emerging Technologies , which highlights tidal power, off-shore wind, and geothermal.  Canada has no existing production capacity for either off-shore wind or geothermal, although the report outlines proposed developments.

Some highlights from the Canada’s Adoption of Renewable Power Sources: the 2015 proportion of 66% renewables in our energy mix is an increase from 60% in 2005;  only five countries (Norway, New Zealand, Brazil, Austria, and Denmark) produce a similar or larger share of electricity from renewable sources; China leads the world in total hyroelectricity production – Canada is second; over 98% of Canada’s solar power generation capacity is located in Ontario.

Other useful NEB publications:   Canada’s Renewable Power Landscape (October 2016), which documents historical growth rates for renewable power in Canada, and each province and territory, and for the latest in energy projections, see Canada’s Energy Future 2016: Update – Energy Supply and Demand Projections to 2040 . These projections, which include fossil fuels as well as renewables,  were published in October 2016 and therefore don’t reflect the policies of the Pan-Canadian Framework on Clean Growth and Climate Change.

The 2015 edition of the Sustainable Energy in America Factbook found that “over the 2007-2014 period, U.S. carbon emissions from the energy sector dropped 9%, U.S. natural gas production rose 25% and total U.S. investment in clean energy (renewables and advanced grid, storage and electrified transport technologies) reached $386 billion”. The report was commissioned by the Business Council for Sustainable Energy and prepared by analysts at Bloomberg New Energy Finance. On February 2, the 2013 Renewable Energy Data Book was released by the National Renewable Energy Laboratory (NREL) on behalf of the U.S. Department of Energy Office of Energy Efficiency and Renewable Energy. Key findings include: Renewable electricity, including hydropower and biopower, grew to nearly 15% of total installed capacity and 13% of total electricity generation in the United States in 2013, compared to 23% of all electricity generation worldwide, and 15% in the UK. Solar electricity was the fastest growing electricity generation technology in the U.S., with cumulative installed capacity increasing by nearly 66% from the previous year.