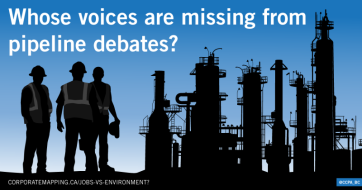 Jobs vs the Environment? Mainstream and alternative media coverage of pipeline controversies  examines how the press—classified into corporate and alternative outlets —treats the relationship between jobs and the environment, and how frequent and influential are the voices of workers and labour unions. The report uses two sophisticated methods of communications analysis – content analysis and critical discourse analysis – to examine two samples:  The first sample comprises 129 articles about Canadian pipeline projects from the Vancouver Sun, the Edmonton Journal  and the Toronto  Globe and Mail  representing corporate media; articles from Ricochet, The Tyee, and the National Observer  represent alternative media.  The second examination was slightly different, made up of 170 articles about the Kinder Morgan Trans Mountain Pipeline Expansion which appeared in the Vancouver Sun and two commuter tabloids in Vancouver, and including Rabble.ca  to the previously examined alternative sources of  Ricochet, The Tyee, and National Observer.

The analysis is detailed and makes many interesting observations. Briefly, the authors conclude from these samples that both  mainstream and alternative media frequently reinforce the assumption that there is a trade-off between environmental protection and job creation. Though alternative media are more critical  of pipeline projects and provide more of the  perspectives of Indigenous people and environmentalists, the authors conclude that  “neither corporate nor alternative media gave much voice to the perspectives of workers and their unions.” And  “while job creation is often touted as a rationale for pipeline projects, the actual workers and their unions—the presumed beneficiaries of fossil fuel expansion—appear to be largely missing from news reportage.”

To sum up, they write that : “… alternative media provide analyses and sources that help counterbalance the apparent extractivist orientation of the corporate press. They make a valuable contribution to well-rounded public discussion and offer perspectives on energy, climate and economic policies that are evidently under-represented in the corporate press.

The authors briefly discuss the labour press – mentioning Rank and File.ca  specifically, and see a role for the labour media in the climate and energy debate. They state: “….. labour’s voice in the media system is muted. There are many reasons why a movement for a just transition has not gained greater traction. Governments have not sufficiently committed to retraining and other supportive measures, and thus there are few working examples for just transition advocates to highlight. But part of the problem lies in the lack of public arenas for exploring the common ground between workers and environmentalists regarding a low-carbon economy. Engaging the public imagination about such a necessary transition would be a valuable goal for corporate and alternative media, as well as media produced by the labour movement itself.”

The authors are Robert A. Hackett, a professor emeritus, and  Philippa R. Adams, a PhD student, both from the School of Communication at Simon Fraser University in British Columbia.  The publisher is the Corporate Mapping Project, a research and public engagement initiative investigating the power of the fossil fuel industry,  jointly led by the University of Victoria, the Canadian Centre for Policy Alternatives’ BC and Saskatchewan Offices and the Parkland Institute. 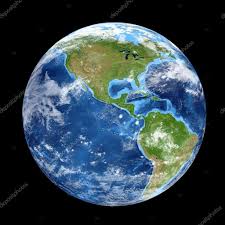 Two high-profile news stories appearing in August highlight the perils of climate change journalism: the “Hothouse Earth”  article, and  “Losing Earth: The Decade We Almost Stopped Climate Change” in the New York Times Magazine.  Both prove the old adage that there are two sides to every story; if you only read the original articles, here is some discussion and context to counter the fatalistic news coverage.

“Trajectories of the Earth System in the Anthropocene” published in the Proceedings of the National Academies of Science (PNAS) on August 6 was  widely reported as the “Hothouse Earth” article. It reviewed the existing studies about feedback loops which could push the Earth System toward “a planetary threshold”  that, if crossed, could prevent stabilization of the climate at intermediate temperatures and cause “continued warming on a “Hothouse Earth” pathway”.  The Guardian translated the  scientific language and quoted some of the authors in “Domino-effect of climate events could move Earth into a ‘hothouse’ state”  (Aug. 7), but the byline “Leading scientists warn that passing such a point would make efforts to reduce emissions increasingly futile” typifies the sort of fatalistic coverage which followed.  One of the worst examples appeared  in an Opinion piece from The Tyee on August 12  “If We Can’t Stop Hothouse Earth, We’d Better Learn to Live on It” .

In fact, the original PNAS paper was a call to action,  calling for “ stewardship of the entire Earth System—biosphere, climate, and societies—and could include decarbonization of the global economy, enhancement of biosphere carbon sinks, behavioral changes, technological innovations, new governance arrangements, and transformed social values.”   It was accompanied by a supplementary document  which included specifics in  Table S5: Human actions that could steer the Earth System onto a ‘Stabilized Earth’ trajectory.  The authors have also been active in promoting  their main message: “World is finally waking up to climate change, says ‘hothouse Earth’ author”  (August 19) in The Guardian, in which Hans Joachim Schellnhuber states: “There’s a time to sit down and work at your desk and there’s a time to get up and leave the area where you are comfortable. That time is now.”

Similarly, in  “Hothouse Earth” Co-Author: The Problem is Neoliberal Economics” by Kate Aronoff in The Intercept (Aug. 14)  another co-author,  Will Steffen states:  “the obvious thing we have to do is to get greenhouse gas emissions down as fast as we can. That means that has to be the primary target of policy and economics. You have got to get away from the so-called neoliberal economics.” He suggests something “more like wartime footing”  at very fast rates for renewable energy , transportation and agriculture ”.

Others also call for action: Eric Holthaus, in “Terrified by ‘hothouse Earth’? Don’t despair — do something”  in The National Observer (Aug. 7) states  “Humanity is now facing the need for critical decisions and actions that could influence our future for centuries, if not millennia” .  David Suzuki struck a similar note in “David Suzuki: Cool solutions mean a hothouse planet isn’t inevitable” in The Straight (August 14) and also in Rabble.ca , saying, “The research is profoundly disturbing. But the media coverage often missed or downplayed a crucial element: the solutions the report outlines toward a “stabilized Earth pathway.”  Suzuki states: “We must insist that politicians represent the interests of citizens rather than corporations. We must stand up to the fossil fuel industry and climate science deniers.”, and quotes Professor Simon Lewis from University College London and University of Leeds, saying “diagnosing global warming and its consequences is a scientific issue, but solving climate change is about power, money, and political will.”

For a review of other scientific studies : “Is our planet headed toward a ‘Hothouse’? Here’s what the science does — and doesn’t — say” in the  Washington Post (Aug. 10)  by Richard Betts, a U.K. scientist, who credits the importance of the article but speculates that it has received such outsize press response because of the timing of being released in the midst of the world’s heat waves, and because of the use of the perjorative “hothouse” term.

The second case which needs some context:  “Losing Earth: The Decade We Almost Stopped Climate Change” , published on August 1 in the New York Times Magazine . The article was preceded by extensive publicity to establish its importance and authority:  “with support from the Pulitzer Center, this two-part article by Nathaniel Rich is based on 18 months of reporting and well over a hundred interviews, documenting the history of climate change science and activism between 1979 and 1989.” Sounds unassailable, and presents a highly detailed historical account, yet criticism followed immediately. From The Atlantic, “The Problem With The New York Times’ Big Story on Climate Change” (Aug. 1) with the byline: “By portraying the early years of climate politics as a tragedy, the magazine lets Republicans and the fossil-fuel industry off the hook”.  In an interview in Democracy Now, ““Losing Earth”: How Humanity Came to Understand Climate Change & Failed to Act in Time”, Amy Goodman invites Nathaniel Rich  to refute some of the criticism.  Finally,  “Capitalism killed our climate, not human nature”  by Naomi Klein appeared in The Intercept (Aug. 4), stating: “ it is so enraging that the piece is spectacularly wrong in its central thesis.”  … Klein argues that climate activism  “suffered from an epic case of historical bad timing… governments were getting together to get serious about reining in the fossil fuel sector, the global neoliberal revolution went supernova, and that project of economic and social reengineering clashed with the imperatives of both climate science and corporate regulation at every turn.” She concludes: “We aren’t losing earth — but the earth is getting so hot so fast that it is on a trajectory to lose a great many of us. In the nick of time, a new political path to safety is presenting itself. This is no moment to bemoan our lost decades. It’s the moment to get the hell on that path.”

“Standing Rock Solid with the  Frackers: Are the Trades Putting Labor’s Head in the Gas Oven? is a new article by Sean Sweeney,  examining the divisions in the U.S. labour movement over the Dakota Access Pipeline.  The  article , originally published in New Labor Forum and re-posted and updated on the website of Trade Unions for Energy Democracy on October  14 , describes the pro-pipeline statements of the North American Building Trades Unions (NABTU) , and, like Jeremy Brecher’s article  on the same issue , Sweeney sees NABTU as the driving force behind the AFL-CIO’s energy positions.  Likening the current dispute to the internal division over the Keystone XL Pipeline, Sweeney states that  “The DAPL fight suggests that the split in labor is deepening.” Sweeney pays particular attention to (and promises a future article about ) the Laborers’ International Union (LIUNA)’s  Clean Power Progress campaign,  launched in June 2016 to support natural gas as a clean, bridging fuel – with the  glaring omission of any mention of  the emissions of fracking.   The article concludes: “For now, having waged a successful putsch, NABTU is the voice of the AFL-CIO regarding a big chunk of labor’s energy policy. The Federation’s reputation is now so low that it seems to be no longer concerned about ‘reputational damage.’ By linking arms with Standing Rock Sioux, progressive labor is keeping alive the best traditions of labor environmentalism pioneered by Tony Mazzocchi and the Oil, Chemical and Atomic Workers in the 1970s.”

Further updates on the DAPL front:  Protests and arrests  continue as recently as October 22.   But in what is seen as a victory victory for freedom of the press,  on October 18  a judge dismissed trespassing and riot charges against reporter Amy Goodman, the  reporter for Democracy Now whose video ignited support for  the Standing Rock  Sioux Nation protest.   Read the transcript of Amy Goodman’s reaction here   , and complete Democracy Now coverage of the DAPL protests here . For a summary of the judge’s decision,  see the New York Times report  .

In April, three reporters from the online news service Inside ClimateNews.org   won the 2013 Pulitzer Prize for National Reporting, for their story about the 2010 oil spill in Kalamazoo, Michigan.  This is the 3rd internet news organization to win a Pulitzer Prize (Huffington Post and ProPublica being the previous winners) – it is certainly the smallest.  Internet news has now “arrived” and climate journalism has also now “arrived”.  See the press release at  http://insideclimatenews.org/todaysnews/20130416/ny-based-insideclimate-news-wins-pulitzer.  See their full, free website at http://insideclimatenews.org/