A report published by the International Council on Clean Transportation in March,  “Simulating zero emission vehicle adoption and economic impacts in Canada”, was researched by Navius Research of Vancouver. Using economic modelling, Navius forecasts that, even with current policies in place, the ZEV economy in Canada will grow to $43 billion of GDP and 342,000 workers by 2040. With stronger policies, that job creation potential could approach 1.1 million people by 2040.

The employment forecast accompanies a White Paper by the International Council on Clean Transportation which analyzes sales and production trends for conventional and electric vehicles in Canada. It  finds that Canada is the 12th largest vehicle producer in the world, but it’s production of electric vehicles is 80% lower than the global average, at only 0.4% of the total.  The report, Canada’s role in the electric vehicle transition  states that the most important action Canada can take to encourage production is grow its domestic electric vehicle sales market. It also recommends: ….. “Supply-side policies such as research and development funding, loan guarantees, and tax breaks for manufacturing plants are warranted” and “domestic manufacturing requirements for the procurement of public transit vehicles can serve to increase production of electric buses in Canada.” In addition, “Canada can build on its early leadership in developing and producing hydrogen fuel cell technology—especially for heavy-duty vehicles. … hydrogen fuel cell vehicles are likely to play a critical role in Canada’s on-road freight sector…”

A technical  study led by researchers from the Exeter University, University of Nijmegen, and Cambridge University used life cycle analysis to show that in 53 out of the 59 regions studied, electric-powered  vehicles and heat pumps generated less carbon dioxide than cars and boilers powered by fossil fuels. The only exceptions came in the heavily coal-dependent regions of Poland.  “Net emission reductions from electric cars and heat pumps in 59 world regions over time”  appeared in Nature Sustainability in late March,  and is summarized in The Guardian as “Electric cars produce less CO2 than petrol vehicles, study confirms” (Mar. 23). The Guardian article emphasizes that this study is proof against a campaign of disinformation which has slowed the acceptance of these two technologies – and which they address in an accompanying primer, “How Green are Electric Cars?”

According to an article by Carla Lipsig Mumme and Caleb Goods, “an EV powered by average European electricity production is likely to reduce a vehicle’s global warming potential by about 20% over its life cycle. This is not insignificant, but it is nowhere near a zero-emission option”. “The Battery Revolution is exciting, but Remember they Pollute too”  in The Conversation (June 2) also raises a bigger question: “For a technology to be seriously considered ‘green,’ the processes by which the tech is produced and the ways in which it operates, must also be ‘green.’” The authors then discuss the detrimental health consequences of the mining and manufacture of lithium ion batteries, which is the focus of a spin-off article in the National Observer, “ Your green Car could cause Black Rain in China”  .

Yet there are emission savings to be made, according to researchers from the School of Resource and Environmental Management at Simon Fraser University, British Columbia, who released the results of their investigation into Canadian consumer attitudes to electric vehicles in July.   Electrifying Vehicles: Insights From The Canadian Plug-in Electric Vehicle Study states that “With today’s electricity grids, usage of PEVs can cut greenhouse gas emissions by 80—98% in British Columbia, around 45% in Alberta, and 58—70% in Ontario.”

In August, Quebec, California, and The Netherlands announced the launch of the International Zero-Emission Vehicle Alliance (ZEV Alliance) to accelerate global adoption of electric vehicles. The press release states uses the term “zero emission vehicles”, and states that the number of ZEVs registered in Quebec has increased by 134 percent over the last 16 months, thanks largely to government incentives and a well-developed public charging infrastructure. 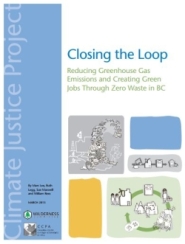 A report released on March 28 calls for a move to a zero waste economy in British Columbia, estimating that more aggressive reduction and recycling of consumer goods could reduce greenhouse gas emissions by almost 5 million tonnes by 2020 and 6.2 million tonnes by 2040. A “closed loop system”, in which products like appliances would be repaired and reused for as long as possible, and finally recycled or reused in new products, would also benefit local economies by creating decent green jobs in repair, servicing and maintenance, waste management in sophisticated collection and sorting systems, as well as re-manufacturing and recycling activities. Based on research carried out in the US, UK and Europe, the authors estimate that “100% recycling of B.C.’s waste, with all sourcing and processing done locally, would support 12,300 direct jobs. With an existing provincial diversion rate of 43%, this would mean about 7,000 new direct jobs. In addition to these, there are also potential jobs gains in the more labour-intensive repair and refurbishment of products.”

“Because there may be job losses from reduced resource extraction and landfilling and incineration practices, “just transition” programs will be needed that facilitate new skills development. On balance, it is anticipated that job creation impacts would be larger than losses, but policy should actively seek to create those jobs by developing the sectors cited above. Promoting and supporting unionized workforces would push green jobs to ensure decent wages and working conditions.”