In Oslo on October 23, the Ellen MacArthur Foundation and the UN Environment Programme  published the first annual Progress Report on the New Plastics Economy Global Commitment .  Part 1 provides a high-level overview of the Global Commitment and its achievements; Part 2 profiles of the programs reported by some of the 400 businesses, organizations and governments which have signed on to the Global Commitment since it launched in 2018. An overview of the Global Commitment, including a list of all participants, is here .  The Progress Report states that  the aim of  the Global Commitment is to: “eliminate the plastic items we don’t need; innovate so all plastics we do need are designed to be safely reused, recycled, or composted; and circulate everything we use to keep it in the economy and out of the environment.” This first progress report sets a benchmark against which progress can be measured, and clearly calls for an increase in the ambition level, particularly to go beyond recycling, to encourage elimination and reuse.   The Press release and summary is here .

The Canadian government is not a signatory to the Global Commitment, although at least one Canadian organization, Sustainable Prosperity Institute at the University of Ottawa, is a signatory, and  the global  Progress Report  provide other examples of  initiatives by Canadian businesses and the provincial government of British Columbia.

Plastic waste is a high-profile policy issue for Canadians, though nearly 90% of plastic waste in Canada is not recycled, according to the  Economic Study of the Canadian Plastic Industry, Market and Waste,  commissioned by Environment and Climate Change Canada and released in June 2019.

On October 31, the government of Nova Scotia passed Bill 152, the Plastic Bags Reduction Act , which also addresses other single-use plastics.  This follows plastic bag bans by Prince Edward Island and some municipalities.

The government of British Columbia issued a  Plastics Action Plan Consultation Paper which discussed four options for regulatory amendments, including single-use bans and extended producer responsibility. The  consultation process was extended to September 30, with amendments to the regulations promised by the end of 2019.

In Ontario, where waste management has played an outsized role in the Conservative government’s Made-in-Ontario Environment Plan , an August 2019 government press release announced next steps for recycling and plastic waste management.  The government had appointed a Special Advisor on Recycling and Plastic Waste, who released recommendations in his report Renewing the Blue Box: Final report on the blue box mediation process . The report calls for a transfer of responsibility for the consumer stream Blue Box program to a new producer responsibility system across the province by December 31, 2025. These concluding remarks typify the business approach of the exercise:

“Investment in research and innovation to create the jobs from the recycled materials should be an interministerial responsibility. Garbage and recycling are not just an environmental issue – they are also economic opportunities…. … More than 99 percent of the plastics collected by the city of Toronto are sold to recyclers right here in Ontario, going to facilities in Shelbourne, Sarnia, and Toronto. Steel and glass collected by Toronto’s recycling programs are processed in Hamilton and Guelph, respectively. This is a prime example of recycling creating jobs and adding value to Ontario’s economy.”

The federal-provincial body, the Canadian Council of Ministers of the Environment (CCME), approved the Phase 1 statement of  a Canada-Wide Action Plan on Zero Plastic Waste in June 2019.  Phase 1 focuses on product design, single-use plastics, collection systems, recycling capacity and domestic markets. The Council promises to release Phase 2 of the Action Plan in 2020, focusing on preventing plastic pollution in oceans, inland lakes and waterways, advancing science to monitor the impacts of plastics pollution within the environment, consumer awareness, clean-up and global action.

Also in June 2019,  the House of Commons Standing Committee on Environment and Sustainable Development released The Last Straw: Turning the Tide on Plastic Pollution in Canada,  the result of a consultation  which received nine briefs and testimony from 41 witnesses (some of which were environmental groups, and none of which were labour unions). The Last Straw made  21 recommendations , calling on the federal government to take the lead on developing standards for plastic products made or sold in Canada, as well as on  a national model recycling system and an extended producer responsibility framework for plastics.  Other recommendations:  Canada should establish a more ambitious goal of reaching zero plastic waste by 2030;  commit to banning harmful single-use plastic products – specifically  straws, bags, cutlery, cups, cigarette filters and polystyrene packaging.

At the Canadian Union of Public Employees (CUPE)  National Convention in Montreal in October, one of the environmental resolutions approved by delegates was a call for a ban on single-use plastics , according to Notes from the Floor . (Online access to the Resolutions is restricted to CUPE members) .

In April 2019, the Association of Postal Officials of Canada, the Canadian Postmasters and Assistants Association, the Canadian Union of Postal Workers, and the Union of Postal Communications Employees  reached a formal agreement   with Canada Post to collaborate to reduce Canada Post’s environmental footprint. The initial focus of activities will be towards reducing greenhouse gas emissions, waste and single-use disposable plastics from Canada Post operations. In early 2020, the parties will publish an action plan for 2020-2022 , with agreed- upon targets for 2020-2030.

Canada’s  Circular Economy Leadership Council published a Policy Brief in the winter 2019  – with recommendations for government action. The Council includes advocacy groups such as IISD and the National Zero Waste Council, as well as corporations including Unilever, Walmart, Canadian Tire, and IKEA.

In February 2019, the Sustainable Prosperity Institute released A Vision for a Circular Economy for Plastics in Canada: The Benefits of Plastics Without the Waste and How We Get it Right.

The initial focus of activities will be towards reducing greenhouse gas emissions, waste and single-use disposable plastics from Canada Post operations. In early 2020, the parties will publish an action plan for 2020-2022 , with agreed- upon targets for 2020-2030.  After identifying a process and timelines, the parties will implement joint initiatives, “Working together with bargaining agents to develop methods of engaging all employees on local opportunities to reduce waste, emissions and energy.”

At the CUPW Convention in May 2019, the union approved its own Action Plan 2019-2023   with detailed objectives, with environmental objectives including: research and prepare detailed proposals to reduce the environmental impact of Canada’s postal operations, utilizing the provisions of Appendix “T” of the Urban Postal Operations (UPO) collective agreement ; Ensure new jobs for servicing new vehicles and equipment to reduce the environmental impact; Conduct a thorough environmental analysis of CUPW operations at the Local, Regional and National levels and ensure structural changes include an environmental impact assessment; Work with the academic and environmental communities on initiatives beyond the postal system; Participate in conferences and organizations dealing with the impact of climate change and solutions to halt and reverse the damage to our planet. 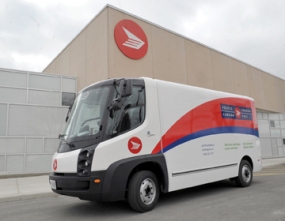 The Canadian Union of Postal Workers  (CUPW) and  Canada Post are currently negotiating a new collective agreement, with “Canada Post hellbent on labour dispute as talks continue, union president says”   in the  Toronto Star (July 12). If no deal is reached by September 9, a strike or lockout is possible by September 26.  An important goal has been to consolidate two agreements into one, and to achieve equity between the Rural and Suburban Mail Carriers (RSMC) unit and the Urban unit on job security, guaranteed hours of work, and wages, following an arbitration award in CUPW’s favour on June 1 .   Also highly important  in this round of negotiations, however, are  CUPW demands related to climate change and the environment. 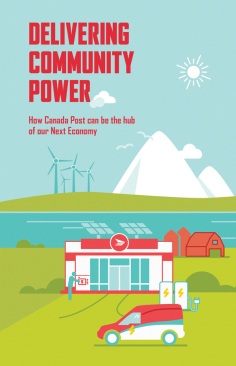 CUPW’s interest in environmental issues is not new.  In February 2016, CUPW  launched  The Delivering Community Power Initiative which re-imagines the postal service by leveraging its huge retail network to provide: Charging stations for electric vehicles at post offices; postal banking, especially to rural and indigenous communities; community hubs for digital access and social innovation. In addition, the postal vehicle fleet could be converted to renewable fuels; provide consolidated last-mile delivery service that would ease congestion and pollution in urban centres; and vulnerable people in their own homes could be served  with a check-in service by door-to-door mail carriers.  The 2012-2016 collective agreement between CUPW and Canada Post  included an Appendix T: Service Expansion and Innovation and Change Committee,   which secured the right “to establish and monitor pilot projects which will test the viability of the proposals” to expand services – and from CUPW’s perspective, these could  lay the groundwork for its Community Power initiatives.

In the current negotiations, CUPW’s Negotiating Update  (August 2) states: “We recognize that both Canada Post and CUPW have responsibilities to work together to reduce our environmental impact. We have put forward a bold vision: Delivering Community Power. Our vision will expand services for everyone and generate more revenue while also creating new jobs. It’s interconnected: our environment demand supports the Delivering Community Power campaign, and the campaign’s massive public support will help us in bargaining. “  An updated statement of  the Community Power document was released in August: Delivering Community Power: Postal Service and the Low carbon economy and in June CUPW  published It’s time for a postal bank for everyone: How a bank in the post office could help you  to present the advantages of postal banking and describe examples from other countries.

The specific environment–related demands, as outlined in Negotiating Program Bulletin are :

C.3: Improve Services and Standards to the Public: Expand retail services, delivery hours, banking, and internet and other services. Contract-in all work that CUPW members can perform with no contracting out of work. Maximize work in local communities.

CUPW’s long history with environmental concerns is outlined by Geoff Bickerton, Meg Gingrich and Sarah Ryan in Chapter 9: “Climate change and work and employment in the Canadian Postal and Courier Sector”, in the book Climate@Work   (2013) .   In 2016, Carla Lipsig Mumme of the Adapting Canadian Work and Workplaces to Climate Change project (ACW) made a presentation  to the federal government’s Standing Committee on Government Operations and Estimates, titled Canada Post and Environmental Leadership , which made proposals for a Green Plan for Canada Post, drawing on many of the CUPW themes.   Canada Post Corporation’s latest Sustainability Report (2016)   reports on existing environmental performance re fleet performance, GHG emissions, landfill waste diversion, paper consumption, and building operations and real estate.